A couple of weeks ago, Iran sent its foreign minister for a triumphal tour of Latrine America.

After attending the Dictator’s Summit in Venenozuela, Rouhani will head straight to the Castro Kingdom, where he will hold “negotiations” about “multiple cooperation agreements” with King Raul.

While in Castrogonia, the Iranian despot will also visit Ex-Maximum Leader Fidel.

Afterwards, Rouhani will travel north, to meet with other enemies of the U.S. at the United Nations.

After attending a Non-Aligned Movement (NAM) summit in Venezuela this week, Iranian President Hassan Rouhani will travel to Cuba for an official visit before heading to New York to take part in an annual session of the UN General Assembly, an Iranian official announced.

Parviz Esmaili, the deputy for communications and information at the president’s office, said on Monday that President Rouhani will leave for Venezuela on September 16 to attend the NAM summit, due to be held on Margarita Island.

Apart from meetings with a number of world leaders on the sidelines of the summit, President Rouhani will hand over Iran’s rotating presidency of the NAM to Venezuela, he added. 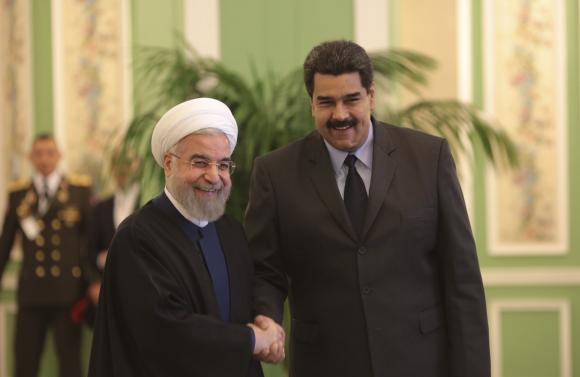 Moreover, Iranian officials in the president’s entourage will actively take part in a number of specialized gatherings at the summit, Esmaili noted.

At the conclusion of the Venezuela visit, President Rouhani will travel to Havana at the formal invitation of his Cuban counterpart Raul Castro.

During his stay in the Caribbean island nation, President Rouhani will meet with his Cuban counterpart and also Fidel Castro, while high-ranking delegations from the two countries are expected to hold negotiations and sign multiple cooperation agreements, Esmaili added.