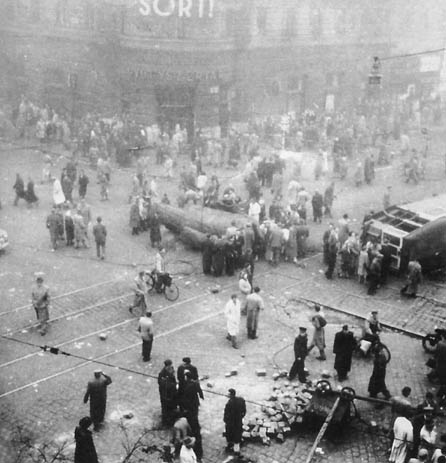 My father, a young banker at the time, tells me that some Hungarian refugees arrived in Cuba after their failed revolution of 1956.  They were hard working people who found their way to Cuba to start a new life.

He met them when they came by the bank to open a checking account for their new businesses and life in Cuba.  He recalls their stories of communism and repression.

Ironically, my parents confronted the same communism and repression in a few years.

It was a long time ago but the bravery of the Hungarian people is worth remembering.

I am a strong believer in reminding the younger generation that freedom is not cheap. In fact, many have paid the ultimate price to fight for it.

Many Hungarians did this month in 1956!

Before Prague 1968 or Poland 1980, there was Hungary, one of the great chapters of human valor of the 20th century.

From mid-October 1956 until the Soviet tanks crushed the revolution, the people of Hungary stood tall against overwhelming odds and indifference from the West:

“From 1945 on the Hungarians were under the control of Moscow.
All wealth of whatever nature was taken from Hungary by the Russians who showed their power by putting thousands of Russian troops and hundreds of tanks in Hungary.
The Hungarian leader, Rakosi, was put in power by Stalin of Russia.
When Stalin died in 1953 all people in Eastern Europe were given some hope that they might be free from Soviet (Russian) rule.
In February 1956, the new Russian leader Khruschev made a bitter attack on the dead Stalin and his policies and in July 1956 in a gesture to the Hungarians, Rakosi was forced to resign. In fact, the Hungarians had expected more but they did not get it.
This situation, combined with 1) a bad harvest 2) fuel shortages 3) a cold and wet autumn all created a volatile situation.
On October 23rd 1956, students and workers took to the streets of Budapest (the capital of Hungary ) and issued their Sixteen Points which included personal freedom, more food, the removal of the secret police, the removal of Russian control etc. Poland had already been granted rights in 1956 which had been gained by street protests and displays of rebellion. Hungary followed likewise.
Imre Nagy was appointed prime minister and Janos Kadar foreign minister. They were thought to be liberal and in Moscow this was felt to be the best way to keep happy the “hooligans” as the Moscow media referred to the protesters. As a gesture, the Red Army pulled out and Nagy allowed political parties to start again. The most famous man to criticise the Russians was released from prison – Cardinal Mindszenty.
On October 31st, 1956, Nagy broadcast that Hungary would withdraw itself from the Warsaw Pact. This was pushing the Russians too far and Kadar left the government in disgust and established a rival government in eastern Hungary which was supported by Soviet tanks.
On November 4th, Soviet tanks went into Budapest to restore order and they acted with immense brutality even killing wounded people. Tanks dragged round bodies through the streets of Budapest as a warning to others who were still protesting.
Hundreds of tanks went into Budapest and probably 30,000 people were killed. To flee the expected Soviet reprisals, probably 200,000 fled to the west leaving all they possessed in Hungary.
Nagy was tried and executed and buried in an unmarked grave. By November 14th, order had been restored. Kadar was put in charge. Soviet rule was re-established.” (The Hungarian uprising of 1956)

One of my heroes was the late Cardinal Mindszenty, who was imprisoned for 8 years and then given asylum at the US embassy. He died in Vienna in 1975 and never saw the collapse of the Soviet bloc.

We Cubans have a special place in our hearts for anyone who stood up to communism.

We salute the brave people of Hungary and how they fought for freedom years ago.
P.S. You can hear CANTO TALK here & follow me on Twitter @ scantojr.

1 thought on “November 1956: Remembering the people of Hungary”