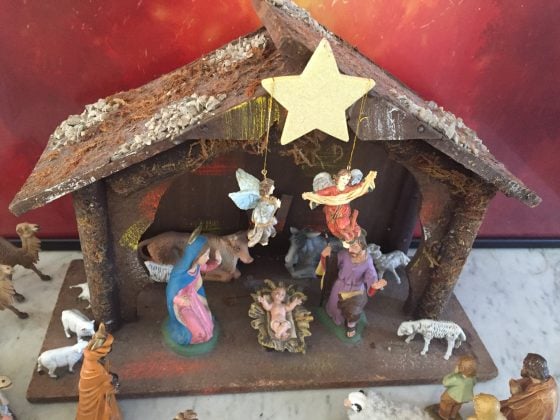 Nothing says Christmas like a nativity scene, or nacimiento.

As we Cubans fled into exile — much like Jesus, Mary, and Joseph had to do when King Herod began to act like Fidel — we couldn’t bring anything with us.

But we weren’t going to let Fidel, our Herod, deprive us of Christmas, even though we arrived penniless in our Egypt.

The nacimiento above is an exiled family’s response to Fidel.

My mom bought it in December 1965, at the Bryn Mawr Avenue Woolworth dime store (“tencén”) in Chicago, shortly after reuniting with her two boys.

We had just moved into our basement apartment.  She had just arrived in the United States, without her husband, and she was unemployed.

We had no income, no furniture, no dishes or pots or pans, no nuthin’, except a few bucks my brother and I had saved from our part-time jobs.over the previous two years

It must have been cheap, otherwise we couldn’t have afforded it.  But it was Italian, fairly well-made, and “muy fino,” as my Mom used to say.

Over the years, my mom bought some extra figurines, not so well-made: some plastic lambs, camels, and Wise Men.

As soon as I had children of my own, she passed it on to me, so they could enjoy it.  They added a big star, and dangling angels.

This nacimiento is now 51 years old, a veritable holy relic of our exile and an enduring source of cheer.

Had someone told me back in 1965, at that Woolworth’s store, that I’d be writing about it in 2016, and that the Castro dynasty would still be in control of Cuba, I would have been shocked.

Had someone told me that it would still represent utter joy to me, I wouldn’t have been surprised, not in the least.

It’s a symbol that transcends all evil, a symbol like no other, a world of infinite meaning,  infinite promise, infinite freedom.

So, Merri Cri’ma, and may the feast of the Incarnation of Our Lord and Savior, the King of kings, bring infinite cheer to you and yours …. 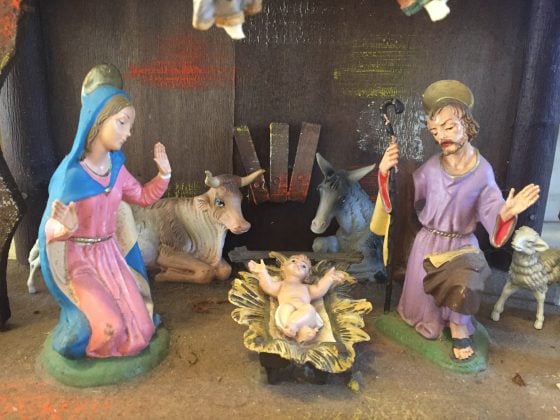