Freedom and remembering those who paid the ultimate price: Oswaldo Payá and “13 de Marzo

“In Cuba there are missing and it is known who has disappeared them, the latter are heroes for the government….There are more than 20 murdered children waiting to be claimed and mothers and grandmothers who were not allowed to look for them when they were killed off the coast of Havana” – Oswaldo Payá Sardiñas, El Nuevo Herald, March 18, 2005* 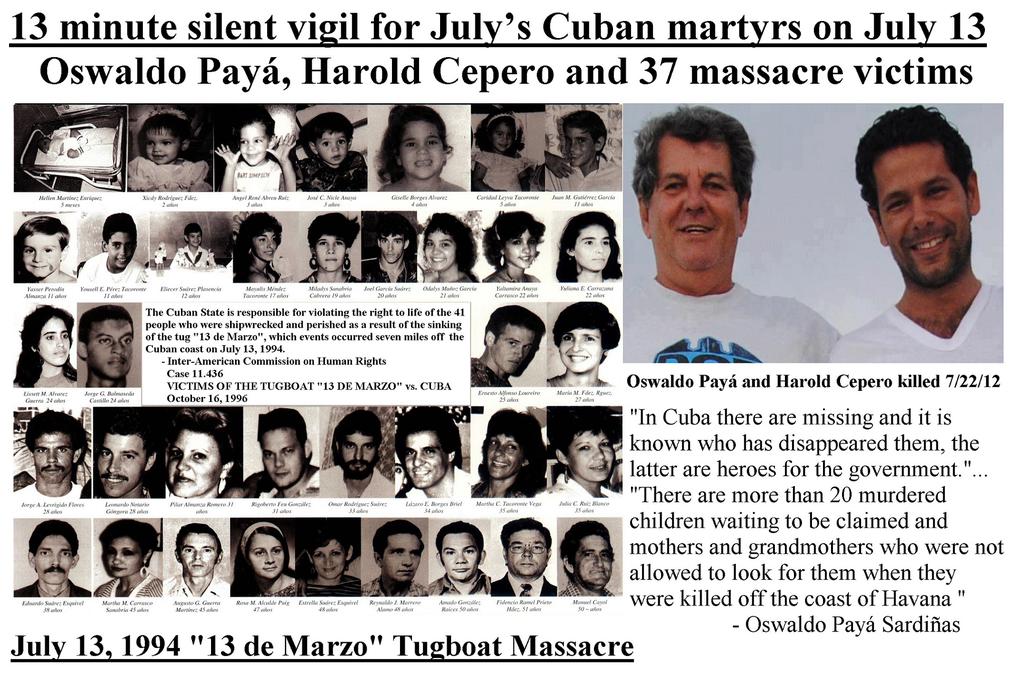 23 years ago on July 13, 1994 in the early morning hours, a few miles off the coast of Havana several families risked all to get to freedom and paid a terrible price. The Castro regime had learned of their plans, rather than preempt and stop the journey before it started, the dictatorship opted to make an example of them in an act of state terror that will never be forgotten by those touched by this crime against humanity.

Five years ago on July 22, 2012 in Eastern Cuba two human rights and pro-democracy leaders who had organized a petition drive 15 years ago that shook the dictatorship to its very core were murdered in a successful effort by Cuban state security to silence and stop those who could not be intimidated by threats of prison, violence or even death. It is an outrage but not a shock sadly because Cuba is a totalitarian, communist dictatorship where human rights have and continue to be systematically violated.

However the unfolding events at the University of Miami are both an outrage and shocking because we are told that America is the land of the free and universities are supposed to be bastions of free academic inquiry.

Yesterday we learned that the Institute of Cuban and Cuban American Studies (ICCAS) was going to be shut down on August 15, 2017 after 18 years of becoming an established institution in South Florida and its director Professor Jaime Suchlicki resigning in protest over the direction that the University of Miami administration has decided to take on Cuba.

The logical question that arises is why? Why would the President of the University of Miami want to do away with this prestigious institution?

Earlier this year on January 19, 2017 ICCAS hosted a book presentation on The Sinking of the “13 de Marzo” tugboat by Jorge A. Garcia who lost seventeen family members on July 13, 1994 and over 20 years later remains a man marked by the devastation visited upon his loved ones. How many other universities around the United States with a Cuba program have organized a book presentation about this heinous crime? Despite being well documented, even human rights organizations such as Amnesty International and Human Rights Watch ( who both documented the crime when it happened) seem to have developed amnesia on these extreme atrocities when conducting an assessment of the human rights legacy of Castroism at the time of Fidel Castro’s death in November of 2016.