Trafficking in Goods, a Strategy to Survive in Cuba 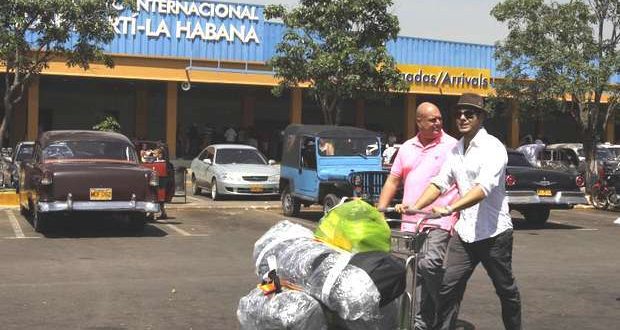 On Havana there are illegal stores for all tastes. Pirated jeans at 20 CUC, copies of Nike shoes at 40 CUC and imitation Swiss watches at 50 CUC. People with higher purchasing power mark the difference. By catalog, they buy fashions, smartphones, LED lights, Scotch whiskey, Spanish wines.

And although the General Customs of the Republic of Cuba applies retrograde and severe laws on the importing of merchandise, rampant corruption always opens a gateway to singular private commerce. Although there are no exact figures, it is calculated that it moves twice as much money on the island as does foreign investment.

Let me present Rolando, the fictitious name of a guy who has been a ‘mule’ for three years. “My grandparents live in Miami and to supplement their pension, they became ‘mules’. They took the orders to customers’ homes, whether it was clothing, medicine, household goods or dollars. When travel abroad became flexible in 2013, I obtained a multiple-entry visa for the United States. Every year I travel seven or eight times and I bring stuff either for family use or to resell. All for a value of four to five thousand dollars.”

The complicated Customs regulations only allow Cubans to import certain goods once a year and to pay the customs fees in Cuban pesos — rather than convertible pesos, each of which is worth 25 times as much — but by means of bribes under the table the provisions of the law can be evaded.

Yolanda, an assumed name, is dedicated to bringing garments and hair products. “In Cuba, the stake fucks anyone who follows the letter of the law. This is the case for Cubans living in other countries when they send things by mail: they can only send three kilograms and if the package exceeds that weight, every additional kilogram is taxed at 20 Cuban convertible pesos (CUC). A real abuse.

“What do those of us who dedicate ourselves to this business do? We have good contacts in Customs and so we can take all the stuff through. You pay the people according to what you bring. If you bring in goods valued at $10,000, for example, you have to give them $200 and a “present” which can be a flat screen TV, a home appliance, or some clothing.”

According to Yolanda, “Palmolive, Colgate, Gillette or Dove toiletries sell like hot cakes in Cuba. If you buy in the free zone of Colon, Panama, you earn a little more. In Miami, it depends on the place: in small stores and wholesale markets you get more for you money. Gillette deodorants purchased wholesale will come out at $1.50 and in Havana they will be sold at 5 CUC (roughly $5 US).

“An appliance or television is not profitable if you buy it at Best Buy, you have to buy it in Chinese stores or have a contact that sells it wholesale. The problem of the electrical appliances is that they weigh a lot, that’s why they are shipped by boat.

“With the exception of certain items that my regular customers order from me, the rest I buy to sell in quantity to the resellers. On a trip, apart from recovering expenses, I can earn up to 800 CUC. And I am a new ’mule’ in this market, the ones that spend more time, they earn three times more, because they bring more expensive items such as car parts and air conditioning equipment.”

Several ‘mules’ consulted believe that the best places to buy merchandise are Panama, Miami, Peru, Ecuador and Mexico. “Moscow is expensive for the cost of the plane ticket. But if you have the way to bring into the country large quantities of parts and components for cars and motorcycles, you earn a lot of money. Any trip leaves a percentage of profits that ranges from 30 to 100 percent,” says Rolando.

Recently, the Wall Street Journal published a report on the traffic of automobile parts between Moscow and Havana: “They travel 13 hours, sleep crowded in emigre apartments and ask for borrowed coats and boots to rummage and bargain in a cold weather looking for used parts of the Russian capital. But do the accounts: a Lada car of the Soviet era in good conditions sells on the Island for 14 thousand dollars.”

The current collection of Soviet-era vintage cars has made the supply of parts and components for these cars into a highly profitable business. “In Russia there are few Moskoviches, Ladas and Volgas manufactured in last century still running. With the help of Cubans residing in Moscow, full cars are bought for the equivalent of 300 or 500 dollars and scrapping them for pieces increases the values tremendously. There are also small businesses where you can packaged new parts,” explains Osiel, dedicated to the selling of car parts bought in Russia.

It may seem like an unimportant business, but a Soviet-era car, with an American chassis and parts from up to ten different nations, costs $10,000 to $20,000 in Cuba.

In the Island you find ‘mules’ specializing in the most diverse branches. “I only buy smart phones, tablets, PCs and laptops. After paying the respective bribe, in a single trip I bring in up to ten phones, five or six tablets, two PCs and four laptops. The profits can exceed 3,000 CUC. Smartphones are a gold mine. Companies buy them, then through payment they activate to unlock them and there are those who know how to ’crack’ them. In Havana, the iPhone 7 or Samsung 8 is cheaper than in Miami,” says Sergio.

At the beginning, the ‘mules’ started as a business managed by Cubans living in the United States and they moved any amount of money and stuff. The parcels are delivered personally to people in their homes.

After the olive-green state did away with the so-called White Card — the travel permit you use to have to have — that blocked Cubans from traveling freely, thousands of compatriots on the island decided to become ’mules’ and started to traffic in goods.

According to Rolando, “It has many points in its favor: you do not work for the government and do not depend their shitty wages. On each trip, you earn a ticket that makes your life more comfortable, you disconnect, meet people and travel to clean cities and well-stocked stores. And the government has not opened fire on the ‘mules’ as much as they have on the self-employed.”

In addition, they don’t pay taxes to the state for their underground business.