The regime has rifles and armored vehicles, but the people have numbers and anger. 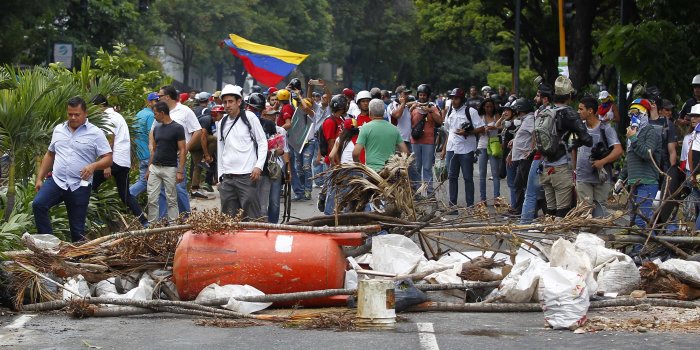 Forget all you’ve heard about dialogue in Venezuela between the regime and the opposition. Hungry, hurting Venezuelans are done talking. The country is in the early stages of civil war. Sunday’s Cuban-managed electoral power play was the latest provocation.

In my column two weeks ago, “How Cuba Runs Venezuela,” I failed to mention Havana’s 2005 takeover of the Venezuelan office that issues national identity cards and passports. It was a Castro-intelligence coup, carried out with then-President Hugo Chávez’s permission. The move handed Havana the national Rolodex necessary to spy on Venezuelans and surreptitiously colonize the country. Islamic extremists received Venezuelan passports to give them false cover when crossing borders. Regime supporters got the papers they need to vote under more than one identity.

This is something to keep in mind when Venezuelan strongman Nicolás Maduro reports the results of Sunday’s election for representatives to draft a new constitution. In polls, some 80% of Venezuelans oppose Mr. Maduro’s “constituent assembly.” But the opposition boycotted Sunday’s election because they know Cuba is running things, that voter rolls are corrupted, and that there is no transparency in the operation of electronic voting machines.

Opposition leaders in Caracas are still trying to use peaceful means to unseat Mr. Maduro. Last week they orchestrated an effective 48-hour national strike and on Friday another day of demonstrations.

But grass-roots faith and hope in a peaceful solution has been lost. One symptom of this desperation is the mass exodus under way. On Tuesday the Panam Post reported that “more than 26,000 people crossed the border into Colombia Monday, July 26, according to the National Director of Migration in [the Colombian city of] Cúcuta.”

Last week the National Guard arrested and badly beat violinist Wuilly Arteaga, who has become a national symbol of peace. Many of those fleeing say they fear that after Sunday the regime crackdown will intensify. Some of those staying behind have already begun to launch counteroffensives. This provides the regime an excuse for increasing repression, yet there is a growing sense that violence is the only remaining option.

The regime has the armored vehicles, the high-powered rifles, and the SWAT gear. But the population has the numbers and the anger. It also may increasingly have support from dissident government forces.

Consider what happened in the municipality of Mario Briceño Iragorry in the state of Aragua earlier this month, when the pro-government mayor and the regime’s paramilitary, known as colectivos, began looting shops that were closed during a one-day national strike.

Eyewitness testimonies sent to me by a source in Caracas describe how townspeople tried to defend the shops. The mayor brought in paramilitary reinforcements. But the town was saved when the judicial police arrived from the state capital of Maracay. According to the Venezuelan daily El Nacional, they arrested the mayor, who was armed, and “many” colectivos.

The judicial police, who number around 12,000 and conduct criminal investigations, are Venezuela’s largest national police agency. They are also responsible for protecting Attorney General Luisa Ortega Díaz. Ms. Ortega broke with the regime in March when the Maduro-controlled Supreme Court tried to dissolve the opposition-controlled legislature. She is an outspoken critic of Mr. Maduro’s constituent assembly. She has not been arrested, probably because the regime doesn’t want to confront the judicial police.

There are also dissident members of the military but their possible role in recovering democracy seems difficult. The leadership is pro-regime and though there are rumors of grumbling among the lower ranks, organizing a coup requires communication. The security and intelligence apparatus installed by Cuba makes that challenging.

But a citizens’ revolt, led by young people whose families are starving, is already under way. Last week after 24-year-old Ender Caldera died from injuries sustained in a demonstration in Timotes, Merida, his friends exacted revenge by intercepting an armored National Guard truck on a mountain road and setting it afire. Numerous other National Guard vehicles have been torched in Caracas.

The state of Barinas, where the late Hugo Chávez was born, was once a regime stronghold. Today it is an antigovernment pressure-cooker where dissidents burn debris in the streets and confront the National Guard. It is the state with the highest number of protest fatalities in the country since the street protests began in April.

Mr. Maduro tried Sunday to put a “democratic” imprimatur on his power grab. But by the afternoon there were at least six dead in clashes with the regime. On the streets of Venezuela, it is now fight or flight.