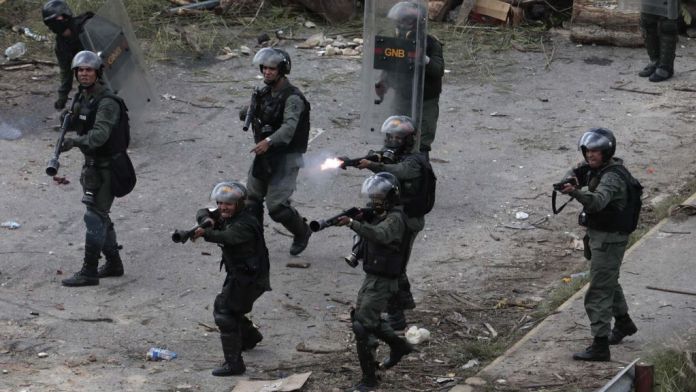 It was Venezuela’s bloodiest day to date since the protests against the Maduro regime started nearly four months ago. In an illegal attempt to install a Cuba-style dictatorship, the Castro regime’s puppet dictator, Nicolas Maduro, held a fraudulent Constituent Assembly vote to change the country’s constitution and install himself as dictator-for-life like his masters in Havana.

Despite threats by the regime to fire government employees and take away government assistance from others if they did not vote in the illegal election, voter turnout was dismal. Many more protestors were seen on the streets on Sunday than actual voters, which led the Castro-controlled regime to respond with violent repression. At last count, at least 14 protesters were murdered in the streets of Venezuela yesterday, making it Venezuela’s bloodiest day in recent history.

Nevertheless, the miserable voter turnout yesterday and the violent repression carried out will not stop the Maduro regime from moving forward with their installation of a dictatorship. The vote tallies and outcomes were decided in Havana weeks ago by the true rulers of Venezuela, the Castro dictatorship.

Here is more coverage of yesterday’s Bloody Sunday in Venezuela:

A day of mayhem nationwide, as the government’s fraudulent Constituent Assembly elections are overshadowed by fierce repression and violence against protesters. As of 8:15 p.m. at least 14 people have died — by far the bloodiest of any day since the beginning of the protest cycle almost 4 months ago.

It was a day of carnage.

The Venezuelan Observatory of Social Conflict reported several protests across 18 of the country’s 24 states: repression day, more than election day.

Maduros’s debacle in Venezuela: How noncooperation triumphed over brute force and intimidation

Today in Venezuela the power of noncooperation was on display. Despite threats of reprisals from the Maduro regime for those who did not go out to vote only 12.4% of Venezuelan voters took part in the sham election and 87.6% abstained from taking part in the sham election.What follows are impressions gathered over social media and does not pretend to be an exhaustive report of what took place in Venezuela today, but does provide some snapshots and insights into what happened.

Venezuelan strongman Nicolás Maduro formally began the process to install himself as Venezuela’s dictator today. It began at 6 AM, when Maduro and his wife cast their vote in a constituent election which he summoned despite its illegality and despite widespread condemnation from the international community. Nevertheless, members of Venezuela’s resistance were staging protests against, which the regime had banned during several days, as early as 4 AM.

Under Maduro’s orders, Venezuela’s security forces decided to make protesters pay with their blood for their audacity in defending their own liberty. At 9 PM Caracas time, at least 14 people had been murdered, a number of deadly victims not seen in a single day since the start of the current wave of protests over three months ago.