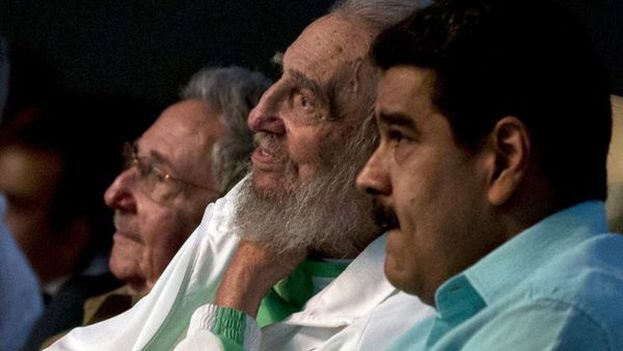 This Sunday Nicolás Maduro buried what was left of Venezuelan democracy. He did so in spite of international criticism, national protests that for more than a hundred days have demonstrated disapproval of the Constituent Assembly, and the difficult economic situation that the country is going through. The new organ of power that is born of this vote copies the Cuban model and closes off any peaceful path to a change in the system.

Havana rushed on Monday to announce the official victory in Venezuela. The headlines appearing in the newspaper Granma, an organ of the Communist Party of Cuba, have all the traces of news previously dictated by a Plaza of the Revolution that has neatly packaged Sunday’s election. Not even the reality of poor turnout and the rejection of several Latin American governments has managed to reverse that script.

Venezuela has begun to walk a path with no turning back. It awaits the dismantling of the few independent structures that could confront the craving for control from Miraflores Palace. From now on, the battle against all vestiges of citizenship will be protected in a supposed entity of “popular power” tailored to the interests of the United Socialist Party of Venezuela (PSUV) and a pitiful copy of the Cuban National Assembly.

In his first statements after the vote, Maduro has already signaled what is coming and made threats against Parliament, the Prosecutor’s Office, opposition leaders and the press. This diatribe will intensify in the coming days and, as the president warned, could end up leading those most critical of these events to “a prison cell, under the command of necessary justice.”

As Fidel Castro once disarmed Cuban civil society, pushed thousands of people into exile and imprisoned or shot his antagonists, chavismo is now preparing to ruin Venezuela for political diversity and civic participation. In order to achieve this, Maduro turns to the carrot and the stick, just as it has been done for almost six decades in this Island.

An army of public workers forced to do what the ruling party dictates, thousands of families dependent on subsidized food products, and a rhetoric of hate to frighten his detractors are some of the weapons that Maduro uses to control a Venezuela assaulted by crisis and political absurdity.

Ranged against the totalitarian longings of Hugo Chavez’s heir is a part of the population that tries to recover in the streets what has been taken away in the institutions, but it can not sustain the battle for long against the military and trained police forces. There is also the international community, accustomed to expressing itself in memorandums and declarations with little practical effect.

Maduro knows that time and diplomacy can appease international agencies and foreign governments. He has learned to lobby the United Nations and to buy the blessing of influential figures who bray for the respect of Venezuelan sovereignty. He understands that a dictatorship can be enthroned and can justify a lack of freedoms with supposed external threats, as he has been taught by the Cuban regime.

This Sunday’s fraud barely leaves two possible paths: the capitulation of civil society and the consummation of totalitarianism or the terrible path of social conflict. Whatever happens, the country will be faced, for decades, with the ghost awakened by this Constituent Assembly.

1 thought on “Reports from Cuba: Maduro takes Venezuela one step closer to ‘Cubanization’”