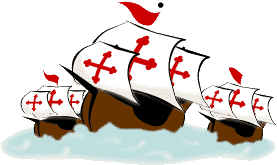 A few years ago, I read that Columbus died not knowing he had discovered a new continent.

The left now wants to take down monuments to Christopher Columbus. I guess that they want to hold Columbus accountable for the original sin of bringing European influence to The New World.

Or, more specifically, Columbus brought the white man to these lands.

The Columbus “haters” forget that the Europeans also brought religious freedom, democracy, the rule of law and a lot more respect for women than they had in the Aztec or Inca Empires.      In other words, did the Aztecs read your rights when you arrested?   Or give you legal representation if you couldn’t afford it?   Or tolerate anyone who wanted to bring down their monuments?

We understand that the Spanish committed some atrocities and there is no sense covering that up.   However, let’s have a little more balance in how we look back at what people did 500 years ago.