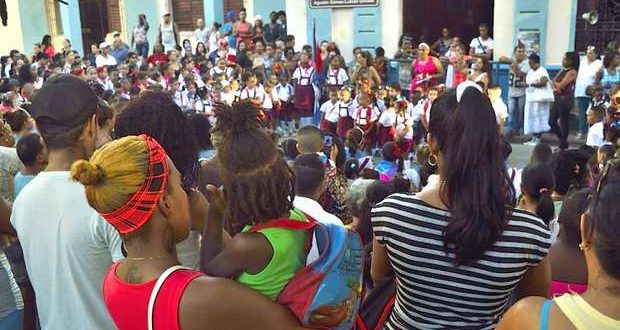 In addition to packing several blouses, underwear and a pair of worn-out jeans the night before travelling to Havana, twenty-six-year-old Magda brought along three homemade cheeses and four kilograms of ground roast coffee.

She plans on selling the cheese and coffee. For six years Madga has been teacher at a high school in Havana. During summer vacations she helps her parents work the land on a small rural plantation in Villa Clara province. Or she sells slices of guava and clusters of garlic on the National Highway to make some extra money.

During the nine months of the Cuban school year, Magda lives in an old warehouse converted into a shelter for teachers from other provinces who work in the capital.

“The housing conditions are horrible. The food is wretched and sometimes there is no water. My salary as a teacher comes to 475 pesos (about twenty dollars), which I spend on pizzas in privately owned cafes. The mothers of some of my friends bring them lunch, an afternoon snack or add money to their cell phone accounts. We don’t earn much as teachers and the working conditions are not the best. That’s why almost no one wants to be a teacher,” says Magda.

A career in education, an essential component in the formation of future generations, has been devalued in Cuba. A teacher’s social status is low and assistance from the state, which finances one-hundred percent of education in the country, leaves much to be desired.

Marlon, a professor in a college prepatory school, notes, “Before the beginning of every school year, there is meeting after meeting demanding higher quality in the classroom, more commitment, more politicial-ideological tasks to counter student’s apathy towards the revolutionary process. But no government official talks about raising teachers’ salaries.”

Seven-hundred thousand students will enroll in primary, secondary, technical, pre-university and university courses  during the 2017/2018 school year but the shortage of teachers continues.

“It’s not as bad as it was ten years ago when Havana, for example, had a shortage of eleven thousand professors. These days, fifteen percent of of teaching postions throughout the island go unfilled. In order to make up for the shortfall in teachers, university students and graduates in technical fields, foreign languages and philology are being recruited. However, it’s getting increasingly difficult to fill those positions one hundred percent,” says an education official.

“And we have other problems,” adds the official. “The educational system has been screaming for changes to bring things up to date. A large portion of the content is out of date. Difficulties remain with the laboratories and textbooks need to be updated.”

Diario de las Americas asked him when primary, secondary and pre-university schools would get internet access. “Not this year,” he replied. “Every semester they postpone installing the internet and replacing old computers with new devices such as tablets. Sometimes the official press reports that it will happen soon, but in reality there is no guarantee. Only universities have internet connections, although the screen time for each student is limited. Everybody else will have to wait,” he replies.

The internet is not a luxury. It is an indispensable tool in every branch of educaton and in human knowlege. The Cuban regime is more interested in making money off of the internet than in making it widely available.

“Young people arrive at university with barely any knowledge of new technologies other than Facebook and Instagram. The internet is essential in any 21st century economic field. Our students are at a disadvantage compared to their counterparts in Latin America,” notes a computer sciences professor.

With the start of the new school year, family expenses include afternoon snacks and as much as 15 CUC (Cuban convertible pesos, roughly $15 USD) a month for a tutor to compensate for the poor education their children receive.

“For a while now, it starts by buying uniforms on the black market for 5 CUC. That does not include money for notebooks, backpacks or shoes, also in hard currency. Last week I spent 135 chavitos (CUC) for a backpack, a pair of tennis shoes, a water bottle and two dozen notebooks,” explains Dunia, the mother of a ninth grader.

“Lunches and afternoon snacks are a headache. There are five days in a week and the school year lasts nine months. Families make ham and cheese sandwiches and give their kids juice or canned sodas if they can. But for most people, just making sure your children get bread with oil and garlic, and guachipupa (a homemade beverage made with sugar and fruit) is like crossing Niagara Falls on a bicycle,” says Nora, a grandmother who brings a noontime lunch to her granddaughter, a high school student.

This school year, the facades of almost all Havana schools got a cheap coat of paint. “But inside everything is still shabby and the restrooms are disgusting,” says Saray, mother of two children in the third and sixth grades. “To maintain hygiene, parents bring detergent and buy fans because the heat in the classrooms is intolerable.”

Like other teachers at the end of their daily shifts, Magda returns to her hostel, grabs the cheeses she made and the coffee she brought from her home province, and goes out to sell them in the neighborhood. “I also sell mobile phones and clothes from overseas. And I paint fingernails at people’s homes. I always say that I have two jobs: a professor in the morning and a street peddler in the afternoon,” she confesses with a forced smile.

When night falls, others such as Miguel, a physical education teacher, puts on a tight dress, high heels and a wig. With a feminine wave of his hand, he says, “I am a teacher by necessity but a transvestite by vocation.”