What if Hurricane María had gone through Cuba? 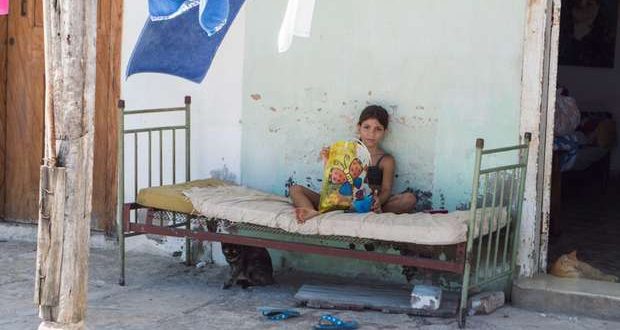 In that bit of Havana between Calle Línea and Avenida del Malecón, people are still taking out mattresses, clothes, furniture, and other things damaged by the sea which was driven inland by the powerful Hurricane Irma two weeks ago, and leaving them to air in the sun.

In any park, house in multiple occupation, or corner in Vedado, with a network of buildings and grand old houses with designs ranging from Art Deco and Neo-Classical to reinforced concrete, built before Fidel Castro changed architecture into the clunky and the vulgar, their residents tell stories with typical Cuban exaggeration.

“I am telling you that when the water got into the garage in my building, the cars were floating. It felt as if someone was tapping on the wall of my room, and it was the cars, which were drifting about like crazy spinning tops,” I am assured by Ignacio a 76-year-old pensioner, standing in a queue to get a portion of yellow rice with hot dogs for 5 pesos (20 cents USD).

In various kiosks improvised by the state to help people affected by Irma’s blast, they sell packets of crackers for 25 pesos, tins of sardines for 28 pesos and guava sticks for 17.

“People with money don’t buy that food, because here we now have electric light and gas in the street. This kind of “grub” is for the poorest people, who, both before and after the hurricane, lived without a cent to their name. The government doesn’t begin to understand that families who have no money, and there are lots of them, cannot buy stuff, even if they sell it cheap. They should give this food away without charge. It’s not our fault we are poor,” says Luis Manuel, a man with calloused hands who collects empty drink and beer cans and then sells them as a raw material.

Not everyone living in El Vedado is upper crust, earning lots of money and being sent dollars from family on the other side of the Straits of Florida. Just like Miramar and other middle class districts in Havana before 1959, El Vedado has been marginalised, many houses are in danger of collapsing, and lots of elegant residences have been transformed into slum tenements with hundreds of families living in dodgy conditions.

The patio of the big old house where the poet Dulce María Loynaz lived, in 14th Street between Línea and  Calzada, has been converted into a plot with innumerable pigstys made of wood and panels thrown up in a hurry.

Round and about the US embassy, where the hurricane mercilessly attacked the building, there are clusters of residential areas and basements of buildings converted into apartments which have been flooded up to the ceiling by sea water.

Magda, a single mother with three children, who sells cleaning products, clothing and memory cards on the side, brought to Havana in suitcases by “mules,” believes she is dogged by misfortune.

“I don’t know why, but destiny is treating me cruelly. I fight to take care of my kids, I am an honest person, I don’t rob or blame anybody. I have bad luck, like I was born under a bad sign.  I have spent fifty years  trying to live the way God wants and trying to get out of being poor. And there’s no way.  And now the government comes down from the clouds with the news that it’s going to sell building materials at half price. They’re either fools or they’re playing the fool. Can’t they understand that people aren’t living badly because they’re masochists? It’s because the money we have coming in isn’t enough to live any better. For people like me, with the roof falling down around our heads, the only way to repair your house is if the state covers all the cost,” says an angry Magda.

Up and down the country there is a frank discussion concerning what kind of strategy there should be about building materials needed to deal with natural disasters. Some think there should be affordable insurance policies, others that designers and civil engineers should come up with houses which are more hurricane-resistant.

“It’s a viscious circle. Every year the government sells you panels and poor quality building materials, and the following year, when a new hurricane comes along, the wind destroys your roof or your house again. What do they make corrugated iron roofs for? You don’t need to be a genius to see that hurricanes always affect the poorest people. None of the houses in Siboney or Miramar, where the elegant people live, suffered any upheavals from Irma,” says Eulogio, who lives on a plot in El Vedado.

Two weeks after the Irma bombshell destroyed thousands of houses, schools, hotels, crops, poultry farms and state institutions in its path, the people living in the areas most affected are at breaking point.

A fisherman living in Isabela de Sagua, 331 kms east of the capital, who is passing through Havana, says “Hurricane Irma practically wiped my village off the map. 90% of the houses were partly damaged or completely destroyed. It will be years before we can recover from it. If Hurricane María had gone through Cuba, we would have needed Jesus to come here after it and pray for us.”

Fifty-eight years after Hurricane Fidel Castro established communism in the island, burying freedom of the press, opposition parties, and converting democracy into empty words, hurricanes are the enemy to be defeated. They affect Cuba, the Caribbean and the United States; the number one enemy of the Castro brothers. Each time they are stronger and more destructive. Human ingenuity, which was able to put a man on the moon, create the internet and eradicate fatal diseases, hasn’t found an effective way to reduce their damage.

As long as the olive-green autocracy goes on distributing panels and materials which are only good for repairing minor damage, and while they go on building fewer than eight thousand solid houses a year, the fury of the hurricanes will carry on devastating the towns in their path. And, as always, the people most affected will be the poor.