(“Now you don’t talk so loud–now you don’t seem so proud,” say the Bolivian soldiers on the right)

Fifty years ago today, Ernesto “Che” Guevara got a major dose of his own medicine. Without trial he was declared a murderer, stood against a wall and shot. If the saying “What goes around comes around” ever fit, it’s here.

For many the questions remains: how did such an incurable doofus, sadist and  epic idiot attain such iconic status? 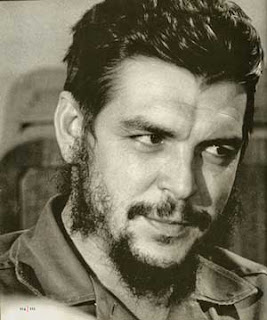 The answer is that this psychotic and thoroughly unimposing vagrant named Ernesto Guevara de la Serna y Lynch had the magnificent fortune of linking up with modern history’s top press agent, Fidel Castro, who — from the New York Times’ Herbert Matthews in 1957, through CBS’ Ed Murrow in 1959 to CBS’ Dan Rather, to ABC’s Barbara Walters, to NBC’s Andrea Mitchell more recently — always had the mainstream media anxiously scurrying to his every beck and call and eating out of his hand like trained pigeons.

Had Ernesto Guevara not linked up with Raul and Fidel Castro in Mexico city that fateful summer of 1955 — had he not linked up with a Cuban exile named Nico Lopez in Guatemala the year before who later introduced him to Raul and Fidel Castro in Mexico City — everything points to Ernesto continuing his life of a traveling hobo, panhandling, mooching off women, staying in flophouses and scribbling unreadable poetry.

Che’s image is particularly ubiquitous on college campuses. But in the wrong places. He belongs in the marketing, PR and advertising departments. His lessons and history are fascinating and valuable, but only in light of P.T. Barnum. One born every minute, Mr. Barnum? If only you’d lived to see the Che phenomenon. Actually, ten are born every second.

His pathetic whimpering while dropping his fully-loaded weapons as two Bolivian soldiers approached him on Oct. 8 1967 (“Don’t shoot!” I’m Che!” I’m worth more to you alive than dead!”) proves that this cowardly, murdering swine was unfit to carry his victims’ slop buckets.

“I read Fontova’s book in two sittings. I COULD NOT put it down.” Mark “The Great One” Levin. 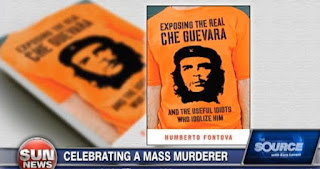