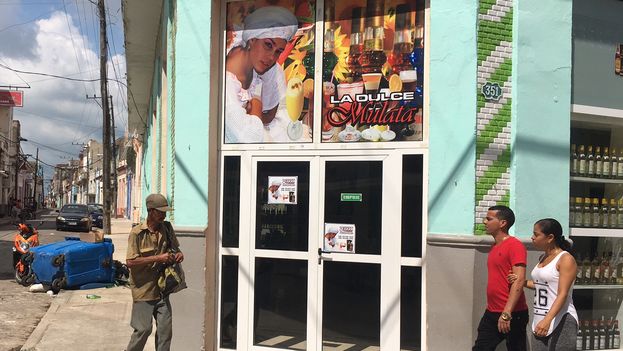 She looks suggestively from the door on República Street in the city of Camaguey. “La Dulce Mulata*” says the poster that accompanies her provocative face. With that name, tourists think it’s a brothel, the clueless bet that it is a perfume shop and only those who dare to enter discover that it is a bar.

Owned by the state-owned Empresa de Comercio, with eight tables and a bar for ten customers, the place has a huge screen that plays videoclips of barely dressed models all day long. The bartender confesses that every week there is a foreigner who asks if it is a “puticlub” – a brothel. Perhaps for this reason, or to evade police controls, the locale has become – little by little – a meeting point for jineteras – hookers – and clients.

“With that name, could it be anything else?” says a customer on his third mojito, laughing. “They call it that for Mulata rum,” adds the guy, although he confesses that “it’s sweet, nobody knows where it came from.” Three other men with their elbows on the bar smirk as they make sexual allusions about the origin of the adjective.

Recently, a Regional Conference on Women in Latin America and the Caribbean finished in Cuba. In the main session, Congresswoman Yolanda Ferrer said that “the concept of the feminine began to change from the day the Revolution triumphed.” However, she avoided referring to the sexist use that continues to be made of the image of women, not only in popular music, but also in tourist advertising and political propaganda.

The conference, convened by the Economic Commission for Latin America and the Caribbean (ECLAC), had room only to extol the situation of women in Cuba, to recall the late Vilma Espín, president of the Federation of Cuban Women, and to slip in another line from Fidel Castro. During the days of the event, tourists continued to arrive at the La Dulce Mulata bar asking, “How much does a woman like the one in the photo cost in Cuba?”