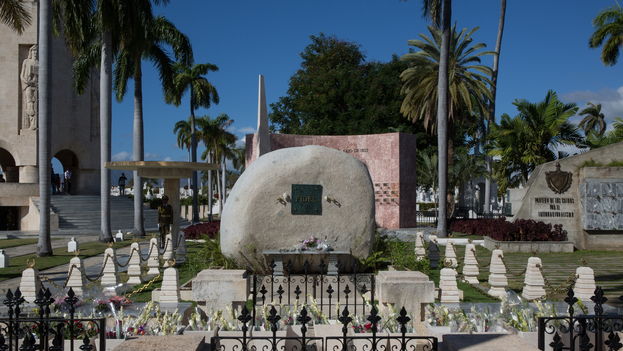 In a simple note consisting only of four paragraphs, the official Cuban press reported yesterday a fact as unexpected as it was unusual: this Tuesday, coinciding with the 149th anniversary of the beginning of the War of Independence, “the political act and military ceremony of the burial of the remains of Carlos Manuel de Céspedes and Mariana Grajales” will take place in the cemetery Santa Ifigenia, in Santiago de Cuba.

As if it were not sufficiently offensive to the memory of José Martí – who devoted his life to, and met his death in pursuit of the dream of a republic of free Cubans – the imposition, in the vicinity of the beautiful funerary monument that honors his memory, of a horrible mortuary rock that contains the remains of the autocrat that destroyed the brief republican mirage and cut off all civil liberties, now the Cuban authorities have granted themselves the right to dispose of the mortal remains of other heroes of the nation, as if this were their particular legacy, and not the whole nation’s spiritual heritage.

But the impunity of the olive-green cupola is as immense as its arrogance. Suffice it to remember that 146 years ago, eight medical students were executed for an alleged crime against the tomb of a Spanish journalist in colonial Cuba.

Such costly mobilization of funerary monuments – of Céspedes and of Mariana – is even more unfathomable in a country where material and financial deficiencies are ever more pressing, and where a very strong hurricane destroyed a significant part of the housing base of the most humble and insolvent Cubans. Only “so that, in the future, the Cuban people and foreign visitors can pay tribute in a more expeditious way, to both, the National Hero José Martí on one side and on the other, the Historical Leader of the Cuban Revolution, Commander in Chief Fidel Castro Ruz…”

It seems that the mortal remains of the Father of our Nation, which were disturbed and publicly exposed in Santiago de Cuba by the Spanish colonial power in 1874, haven’t yet found their well-deserved rest.

The official greed in quest of dollars does not stop at anything. It’s here that the historical memory of the nation, this time using the bones of the most noteworthy deceased, is subordinated to the tourist industry.

But in their decision to mobilize official necrophilia in the service of the particular interests of the Government, it is not only ordinary Cubans that have been excluded. Manuel Hilario de Céspedes and García Menocal, Bishop of Matanzas and descendant of the Father of the Nation’s lineage, was not consulted about it. Neither were other important ecclesiastical authorities, such as Juan de Dios, Auxiliary Bishop of Havana and Secretary of the Conference of Catholic Bishops of Cuba.

Oscar Márquez, the chancellor of the Archdiocese of Santiago de Cuba, was not only not previously informed of the exhumation, but his office has yet to receive any requests to officiate in a Catholic ceremony honoring the remains of such distinguished, undeniably Catholic, Cubans, which demonstrates the rampant contempt of the military elite for all values, feelings and traditions of the nation.

However, the desecration of important tombs and the patriotic memory of the nation is an old practice for that autocracy. For example, in 1987, after the death of an old communist leader who became a faithful servant of the Castro regime, Blas Roca Calderío, his body was buried at Cacahual, of all places, very close to the mausoleum that holds the remains of General Antonio Maceo Grajales, one of the most important heroes of the Cuban wars of independence, in what constituted a sharp affront to all those who erected his mausoleum from public and private donations.

Nothing is sacred to the Cuban autocracy: neither the memories, nor the nation’s heroes, nor the symbols they pretend to honor, nor the children who are the inheritors of the national history. When, on October 10th this conspiracy is finally consummated, the Government will just have added one more injury against Cuba. However, the worst affront is not the desecration of power, but the acquiescent silence of those who should be the true guardians of the historical memory that gave birth to us as a people: Cubans.