This past May, the entire world saw the photos and videos of Cuban dissident Daniel Llorente as he ran onto the May Day parade route in Havana waving a U.S. flag. The brave protestor was quickly caught and in front of the crowds and cameras, beaten and arrested. For the uninformed public outside of Cuba, the intolerance and repression was a disturbing spectacle to behold. For Cubans on the island who dare to speak out against tyranny, it was just another day in Castro’s apartheid Cuba.

Llorente has been in imprisoned ever since. But since the Castro dictatorship wants other Cubans and the world to believe that anyone who would protest their tyranny must be mentally unstable, he has been held in a mental institution. And not just any mental institution, but the most notorious one on the island: Mazorra. For dissidents and other Cubans unfortunate enough to be sent to Mazorra, misery, torture, and death is common.

Man Who Waved U.S. Flag in Cuban Parade Trapped in Mental Ward Despite No Diagnosis 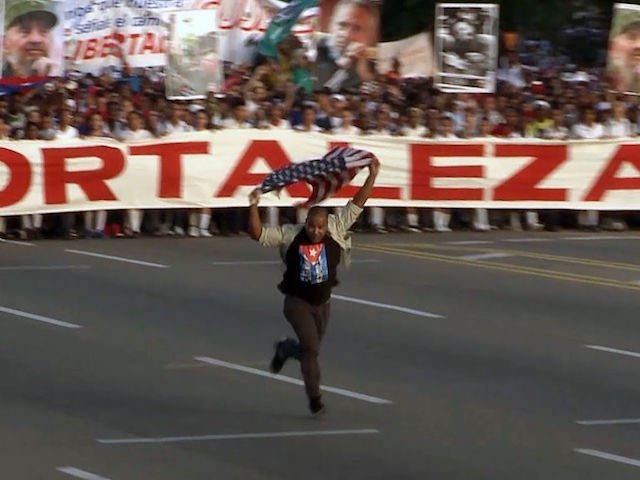 Daniel Llorente, a Cuban dissident who made news in May by running into the island nation’s communist May Day parade waving an American flag, remains trapped in Havana’s notorious mental institution. Family say doctors have not diagnosed Llorente with any illness or charged him with any crime.

The Castro regime has a long history of using the institution in question, known commonly as Mazorra, to isolate and torture pro-democracy dissidents.

This week, the Miami-based outlet Marti Noticias published an interview with son Eliécer Llorente, who stated that “it is obvious State Security is keeping him there,” either to punish the man for his repeated pro-American transgressions or to prevent him from staging more acts of protest. As Llorente is not officially an inmate of the state and has not been charged with any crime, he does not technically count as a political prisoner.

The younger Llorente says his father has refused all medication and food that come from the state, so his family sends him crackers and milk. “He says that he will not eat from the hand of the oppressor,” Eliécer told Martí.

The outlet notes that medical professionals at Mazorra had issued a report in June clearing Llorente of any mental illness, but that report has disappeared and been replaced a month later with a government-provided document claiming Llorente was “aggressive” and required institutionalization.

Llorente had faced charges of “public disorder” following the incident in May, but a local court dismissed the charges in August. The dismissal appeared to have no effect on Llorente’s confinement.

The younger Llorente had also previously told Martí that his father had accused one medical staffer in particular, Dr. Marien Guerra Guerra, of lying to him about his legal status before he confirmed he had been exonerated of the charges against him.

Prior to his son’s interview this week, the Cuban independent outlet 14 y Medio published an interview with Daniel Llorente most recently on October 1, in which Llorente explained, “They tell me here that my situation is on standby because my cause is being examined.” Llorente was aware, however, that the state had dropped the charges against him. He noted that officials did not allow him to leave a tiny area of the mental ward or have much interaction with people.

In that interview, Llorente revealed two tattoos, one on each fist, of the Cuban and American flags. 14 y Medio also noted that Llorente has requested political asylum in the United States, but, despite repeated assurances by President Donald Trump that he would support the Cuban freedom cause, he has yet to receive permission to enter the country.

Llorente referred to America as “the greatest defender of human rights, hope, freedom, justice, brotherhood, and the pursuit of happiness” in the world.