‘Russian Meat’ Returns To Cuba But It Is Brazilian 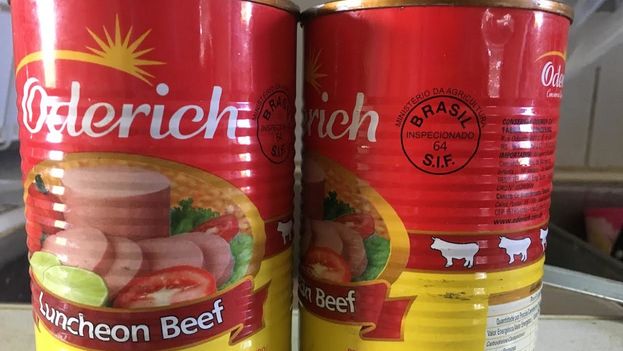 In the years of greater political closeness between the Soviet Union and Cuba several products arrived from the distant Eurasian country to fill the shelves of the stores on the island. Matryoshka dolls adorned thousands of living rooms throughout the country and the national tables were full of dishes made with canned beef labelled Made in USSR. Housewives became experts in buying and cooking it.

In the markets, people tapped those cans without paper labels and with a porpoise’s face painted on metal. If it made a loud sound it had more water or fat than fiber, but if it didn’t make much of a sound it was “good” and worth buying. Russian meat was a part of the Cuban diet for so many years that all canned meat came to be called by the name of that country.

Last October a special supply arrived at the bodegas of the rationed market in several Havana neighborhoods. After Hurricane Irma, the Government sold through the ration book cans of meat from Brazil, from the Oderich brand, at a price of 1.50 Cuban pesos (CUP), for every three consumers registered in the “nuclear” family. In memory of those years of the Soviet embrace people baptized it “Brazilian Russian meat.” What occupied the plate for such a long time is rarely forgotten.