Red Killings in Cuba: The cost in Cuban lives 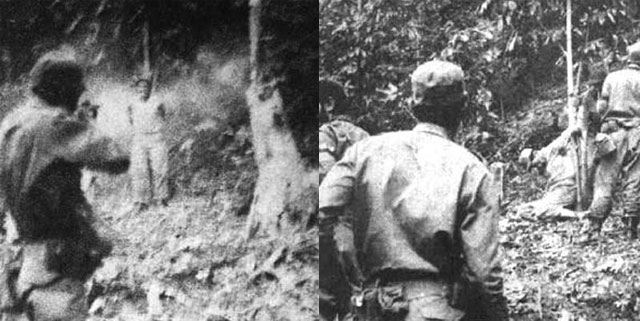 Over the past month victims of extrajudicial killings in Cuba have been profiled with an aim of getting away from dry statistics and focusing on the human cost at an individual level, but a few days ago a came across a discussion on numbers killed in Cuba. This blog entry seeks to join the discussion on death tolls, statistics, and the pursuit of accurate estimates, or in other word discuss numbers.

The body count
Glenn Garvin wrote an important essay one year ago on December 1, 2016 titled “Red Ink: The high human cost of the Cuban Revolution” and in it addresses the question of how many extrajudicial executions have taken place in Cuba. This blog addressed this issue before in 2012, but Garvin adds some new and critical insights to understanding the real nature of the Castro regime.

“University of Hawaii historian R. J. Rummel, who made a career out of studying what he termed “democide,” the killing of people by their own government, reported in 1987 that credible estimates of the Castro regime’s death toll ran from 35,000 to 141,000, with a median of 73,000.”

Matthew White in the introduction to his 2011 book, The Great Big Book of Horrible Things: The Definitive Chronicle of History’s 100 Worst Atrocities explains that:

An exact body count is hard to come by for Castro’s regime in Cuba, but no one has ever suggested that he killed the hundreds of thousands necessary to be considered for a slot on my list. Many infamous brutes such as Francois “Papa Doc” Duvalier, Vlad the Impaler, Caligula, and Augusto Pinochet easily fall short, as do many well known conflicts such as the Arab-Israeli wars and the Anglo-Boer War.

Garvin’s 2016 article also cites Cuba Archive’s death toll number of 7,193 but in 2006 Frances Robles reported that the same organization had a total of 31,173 cases documented. In the article 8,151 were broken down as follows: 5,728 killed by Castro firing squads, 1,207 extrajudicial killings after Castro took power and 1,216 deaths in prison. It’d be curious to learn how after 10 years of additional research (and new extrajudicial killings reported since then) that the number has gone down by 958 deaths. This does not include the debate over numbers who have been killed or died in the ocean fleeing the Castro regime. Nevertheless it is a low outlier among sources on regime killings in Cuba and raises questions on reporting criteria and how to arrive at a number that reflects historical reality.

The cover-up
Marion Smith, executive director of the Victims of Communism Memorial Foundation, that studies the damage of communist regimes on persons and their communities places the difficulty in pinning down the number killed by the Castro regime in a methodology that began with the leadership of the Soviet Union of covering up their crimes and copied by their Cuban counterparts.

“Even after the Soviet Union fell, when some of its archives opened up for a time, all we really learned was the extent of the cover-up, all the measures the Soviets took to cover up their crimes. But we never got a precise number of victims, or their names. The Soviets didn’t want to keep precise records — they had learned their lesson from the Nazis, who did keep precise records, which were used to indict Nazi war criminals at Nuremberg.”

Nevertheless Marion Smith agrees with the Rummel estimate, telling Garvin, “I think that’s a good range. It’s compatible with what we’re comfortable using, which is ‘tens of thousands.’”  It is important to look into regime strategies for covering up crimes against humanity. This is a reasonable analysis with the current information at hand.

1 thought on “Remembering the victims of communism in Cuba: The cost in human lives”