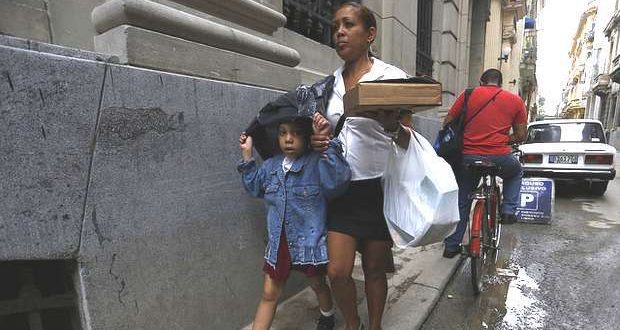 While the group of young people from a high school in La Víbora, south of Havana, were in a physical education class on a dirt track adjacent to the school, Andrés, 40, with a cardboard box on his legs, masturbated frantically sitting on the cement floor of the basketball court.

His relatives call him ’Andriaco the blanket’. He usually masturbates in cinemas and sports fields, using a large cardboard container that has an opening in the front to put his hand in and not attract attention.

Sheila, a psychologist, believes that the laws in Cuba are quite permissive with public masturbators and jamoneros or exhibitionists. “Likewise with sexual harassment and physical and verbal abuse of women. It is a tremendously macho society. Most street masturbators do not have any mental disorder. They need medical treatment, but their IQ is usually above average.”

The Havana psychologist believes that public masturbation and sexual harassment are crimes, because they invade the privacy of a woman without her consent. “And of course the abuse. In Cuba, the sanctions for physical aggressions against women are very soft. The laws condemn a government opponent or someone who kills a cow with a sentence of twenty years, however a man hits his wife or girlfriend, sometimes with injuries, and if they punish him, he serves only one year in jail. Even some policemen do not see it as a crime, but a matter between husband and wife. We Cubans should initiate a public awareness campaign to denounce sexual harassment and gender violence, among other phenomena that affect us.”

Recently, a crusade against sexual harassment began in the United States. The #MeToo Movement establishes a new threshold against the abuse of male power. More than thirty top executives and celebrities have fallen in the last two months, from artists like Kevin Spacey to the doctor for the women’s Olympic gymnastics team.

Adriana, a former basketball player, narrates personal experiences. “Already, as a young woman, it was common that the little girl that the coach had his eye on, he went to bed with her in exchange for selecting her for a provincial or national team. Touching your buttocks, breasts, undressing you with his eyes or masturbating in front of you, was so common that I came to think it was normal. In sports schools and in others with scholarship students, sexual harassment escalates to groping against your will. As far as I know, those behaviors are not reported and those affected are afraid to denounce it.”

Leyanis, 24, recently graduated in telecommunications engineering, says that “the things that women suffer in Cuba have become normal. We have to arm ourselves with a shield if we want to get ahead. We are legally forsaken. From the moment I get up I have to endure the invasion of other people,” and she details:

Nidia, architect, believes, “that the harassment in Cuba is so normal that in a video that I saw, where several generals appear, one of them spanks a uniformed girl who passes by his side. If that is done by those who govern the country, what can be expected from the rest of the Cubans? Impunity is almost absolute.”

“If there is touching and harassment in military life, the situation is unbearable in more liberal sectors, such as the artistic, which has always had a bad reputation. Or in workplaces that have rooms and beds, such as hospitals and hotels where you work 24 hours,” says a retired food service employee who had to endure all kinds of pressure from her superiors to have sex during working hours.

Silvia, a pharmacist, thinks that “the authorities should do something, because at any moment you go out into the street and a man might club you and take you home, like in the Stone Age. When I’m on duty in the early morning at the pharmacy, they harass me on the phone, telling me all kinds of filth or they stop at the door, jacking off. I’ve called the police and they never come, they say they’re busy with more important issues.”

In a macho and predominantly masculine society, where its leaders see sexual harassment as fun, having a lover or girlfriends is a tradition, giving your partner a slap and spreading songs with vulgar and offensive texts towards women is normal, and leaves the Cuban women in a position of absolute helplessness.

As if it weren’t enough to have to endure daily rudeness, discrimination and violence, most of the women on the island come home from work to cook, clean, wash, iron and care for their children, while the husband watches television.

This is one of the ’achievements’ that the revolution has left us.