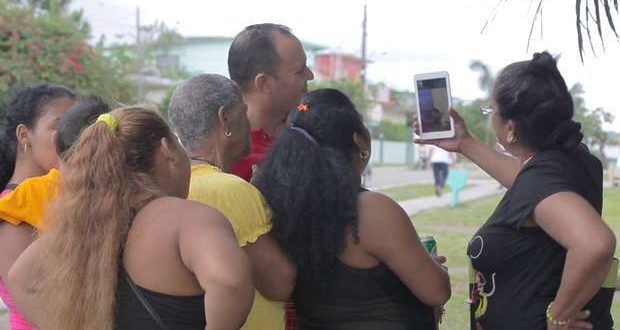 When the old Soviet-era truck was parked in front of a pharmacy in Havana’s La Víbora neighborhood, a line of more than thirty people soon formed to acquire some of the medicines unloaded. Nearby, at the entrance of a produce market, dozens of retirees and housewives waited to buy tomatoes.

In the last week of the year, on the busy Calzada Diez de Octubre, a crowd walked with elbows out loaded down with food. If you ask any of these people about the 1.6% economic growth announced by the regime in 2017, future strategies or their assessment of the rulers, you will find a wide range of responses, from disappointment in the state of affairs to indifference and frustration because nobody listens to them.

“What? The economy grew? That’s a story, partner. It grew for them. Where is that growth hidden that nobody sees it? There are lines everywhere, a total lack of some medicines and others where there’s not enough. Everything is a balloon,” says Armando, a carpenter, who has been waiting for an hour to buy Enalapril for his medical treatment.

The year 2017 started with bad news. In 2016, the Cuban economy had contracted, with GDP shrinking 0.9%, announced Ricardo Cabrisas, Minister of Economy and Planning. And the international scene looked ugly. Against all odds, Donald Trump, won the elections in the United States and the pact between President Barack Obama and the Cuban authorities began to take on water. In Venezuela’s Miraflores Palace, the brotherhood of ’Bolivarian’ compadres was clearly governing like a dictatorship. But the state oil company PDVSA is unable to produce higher oil shares and has had to make cuts that affect the Island.

“That is the key reason why Cuba is facing a dead end. The honorable thing is to throw all that nonsense of five-year plans and triumphalist speeches in the trash and undertake a deep economic reform. Communist nations like Vietnam and China initiated it and achieved an economic miracle,” says Ernesto, a scholar of the Cuban economy.

For his part, Carlos, a sociologist, believes that “one of the country’s biggest problems is its extravagant double currency system that transforms wages into a joke. That financial absurdity causes a flat screen TV to cost twenty times the salary of a professional; it means that agricultural production does not take off; it deforms the state accounting and causes a million people or more to dream of leaving their homeland for good.”

On Thursday, January 12, 2017, Obama repealed the wet foot/dry foot policy and the special program granted to Cuban doctors who could settle in the US any time they wanted. The possibility of stepping on American soil and starting a better life was cut off. In the fiscal year 2016, more than 50 thousand Cubans arrived in the United States, but in 2017 the migratory flow suffered a considerable decrease, according to Marti Noticias.

Heriberto, a retired university professor, thinks that “in response to Obama’s initiatives, the government reacted defensively. In the Palace of the Revolution they are already missing him. The dynamic could be different.”

But Castro’s Cuba responded with the usual petulance, believing that all these concessions were a debt owed by the White House after decades of “imperial aggressions.” And they let the train go by. They refused to develop solid economic foundations, invigorate a broad opening to small and medium-sized private companies and begin to rehearse an authentic and democratic social model.

They bet on stupid political stubbornness, putting their heads in the sand. They paralyzed economic reforms, stopped private work and continued to control and repress those who think differently. They temporarily closed the issuing of business licenses to individuals in many endeavors, and continued to arrest their opponents and seize the equipment of independent journalists.

With the whole country burning down, Raul Castro wrote a letter to Vladimir Putin asking for oil aid. Speaking clearly: he suggested Putin act as the relay pitcher for Nicolás Maduro in energy matters.

“The old KGB fox is still checking accounts. Putin is nationalistic, authoritarian and likes to bang on the table and show that Russia is a center of world power. I think one of the possible scenarios could be to reuse Cuba as a source of conflicts with the United States. Whether reopening an espionage base in the style of Lourdes or a base for nuclear submarines,” argues a former official.

At the moment, the picture is black for Moscow. The US special services have reasonable evidence that the Kremlin manipulated the US election in favor of Trump, a matter investigated by a special commission led by Robert Mueller, former director of the FBI. The sale of state-of-the-art US weapons to Ukraine and a sanctions packages against Russia could be used by Putin to design his next move.

In that game of world chess, Cuba, as on previous occasions, is only a sacrificial piece. The regime knows in advance what it means to ally with Moscow. Raul Castro and his substitute (handpicked by the olive green autocracy), should handle relations with the Russian bear with subtlety.

In the summer, while it became more expensive and difficult to get food in Cuba, the AP agency unveiled a story that seemed to come out of the annals of the Cold War. In installments, AP published that more than twenty officials of the Embassy of the United States in Havana were victims of an alleged acoustic attack: stealth soundwaves that affected their hearing..

It was also learned that in February 2017, Raúl Castro had talked with US chargé d’affaires Jeffrey DeLaurentis and assured him that Cuba was not behind that sonic aggression. For the first time, the authorities allowed the FBI and other US intelligence agencies to investigate in Havana.

Although the White House has not directly accused Cuba, nor has it presented evidence of a hypothetical culprit, the affair resulted in the removal of 50 percent of the diplomatic corps accredited on the Island, and in turn, the regime had to withdraw the same amount of officials from its embassy in Washington.

This brought about a paralysis, until further notice, in the issuing of the 20,000 visas planned for family reunification. Now, those interested must travel to Colombia or Mexico and carry out the procedures there, which means a considerable increase in costs to obtain the stamp of entry to the United States. An official from the State Department, with whom I met at a Miami event, told me that the matter could be delayed for more than a year, “because every six months is when the situation of the Embassy in Havana is evaluated.”

In September, Cuba was affected by the very powerful Hurricane Irma, which for several hours sailed along the north coast of the island causing 10 deaths and considerable damage. Although the regime has not offered exact figures on the amount of the damages, a source told Martí Noticias that “it could exceed twelve billion dollars.”

Irma destroyed hundreds of houses, damaged thousands of homes and its consequences are still visible in agriculture, tourism, state enterprises, cultural facilities and private businesses. Because of the hurricane, the authorities claimed, the municipal elections for the People’s Power were delayed, contents in which about 300 dissenting candidates were considering running. Violently violating their own Constitution, State Security prevented all of these candidates from making it to the contests or being selected.

It is precisely that delay, that us the pretext offered by Raúl Castro to postpone his retirement until April 19, 2018. Meanwhile, the official propaganda works piece by piece, with homages to the deceased Fidel Castro, highlights of record figures in the production of pork and two billion of foreign investment, and pointing out that the number of tourists grew to 4.7 million. But those achievements are still not reflected on the dinner tables of ordinary Cubans.

On the contrary. Every day it is more difficult to find breakfast, lunch and dinner in Cuba. Dozens of medications are missing in pharmacies and hospitals. The quality of public health and education continue to be low. Public transport remains an unaddressed issue. And the real housing deficit exceeds one million homes. Macroeconomics is not something you can eat.

For 2018, no improvements are expected. The probable retirement of Raúl Castro does not excite people. The popular perception is that afterwards could be worse. “Cuba’s problem is systemic. One wonders if the government has a plan B to save us,” says Heriberto, a retired university professor. Will we have to wait for a miracle?