After decades of crime, bloody violence, rape, kidnappings, and thousands of murders, the people of Colombia have had their fill of FARC, the Marxist narco-terrorist group that has been terrorizing Colombia since the 1960s. Despite having this criminal terrorist organization funded by drug trafficking rammed down their throats, Colombians are letting FARC know just how they feel about them and the fraudulent peace deal negotiated by the country’s corrupt president, Juan Manuel Santos. 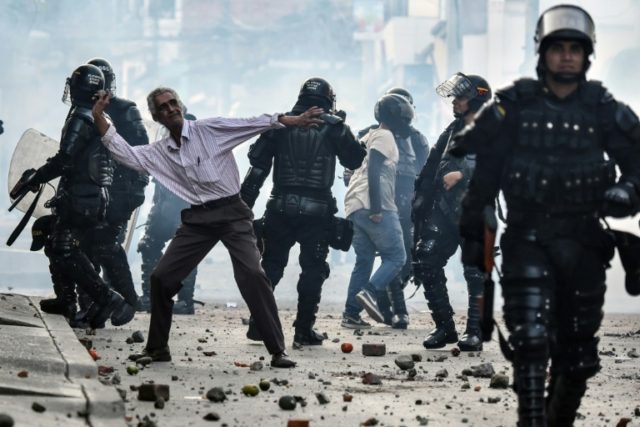 Members of Colombia’s Marxist FARC terrorist organization—who Bogotá has allowed to field candidates in the 2018 elections—indefinitely suspended all its campaigns on Friday after crowds pelted presidential candidate “Timochenko” with eggs and rocks at his campaign stops, chanting “rapist” and “murderer.”

The terrorist “Timochenko,” whose real name is Rodrigo Londoño, is the head of the Revolutionary Armed Forces of Colombia (FARC), which remains a U.S.-designated terrorist group. In its half-century of existence, the FARC’s violence has resulted in 220,000 known deaths and tens of thousands of unsolved disappearances.

The FARC renamed itself the “Revolutionary Alternative Common Force” in September before launching its nationwide political campaigns. Under a peace deal forced upon the Colombian people by President Juan Manuel Santos, the FARC may function as a political party and field candidates for any office. The deal also reserves ten congressional seats for FARC members only through 2026. As the FARC has largely funded itself on ransom cash and drug trafficking, there is a high chance that illicit money will enter the Colombian political system through them.

Colombia voters rejected the peace deal in 2016. That Santos went ahead with it anyway—in violation of the Colombian constitution, critics note—appears to have done little to improve popular sentiment towards the terrorist organization. On February 2, “Timochenko” made his first official campaign appearance in Quindío, an area that Colombia’s El Tiempo notes was chosen because it was the “cradle of history commanders” of the FARC like “Timochenko” himself. Crowds in the town received the presidential candidate and terror chief with chants of “terrorist, murderer, get out!” The FARC canceled a second appearance in public that weekend.

In Cali, “Timochenko” received an even colder welcome. Upon attempting to leave his hotel, a crowd hit him with a barrage of eggs, rocks, and assorted refuse. Protesters also surrounded his car to ensure he could not get out and deliver a message on behalf of the terrorist group.

At yet another campaign stop in Yumbo Valle, protesters surrounded his car and shouted, “Get out, son of a bitch!” A woman can be heard yelling “Pedophiles! Rapists! Murderers!” which is a reference to the FARC’s history of using child soldiers and impregnating the girls, later forcing them to endure violent unwanted abortions.

Protesters also yelled at police, “Why are you protecting him? We have lost family, we have all lost family!”

In Bogotá, a group of women victims of the FARC surrounded the national electoral council, waiting to protest FARC candidates scheduled to appear on February 6. The FARC candidates failed to show, and the women accidentally protested conservative senator Hernán Andrade’s car, instead.

The outcry against the FARC has been so unanimous that FARC senate candidate Pablo Catatumbo announced on Friday that they would suspend all campaigns indefinitely, blaming the Colombian government for not providing “guarantees” against the freedom of speech of the protesters.