Organized by the Free Cuba Foundation:

To forget the victims means to kill them a second time. So I couldn’t prevent the first death. I surely must be capable of saving them from a second death.” –  Elie Wiesel 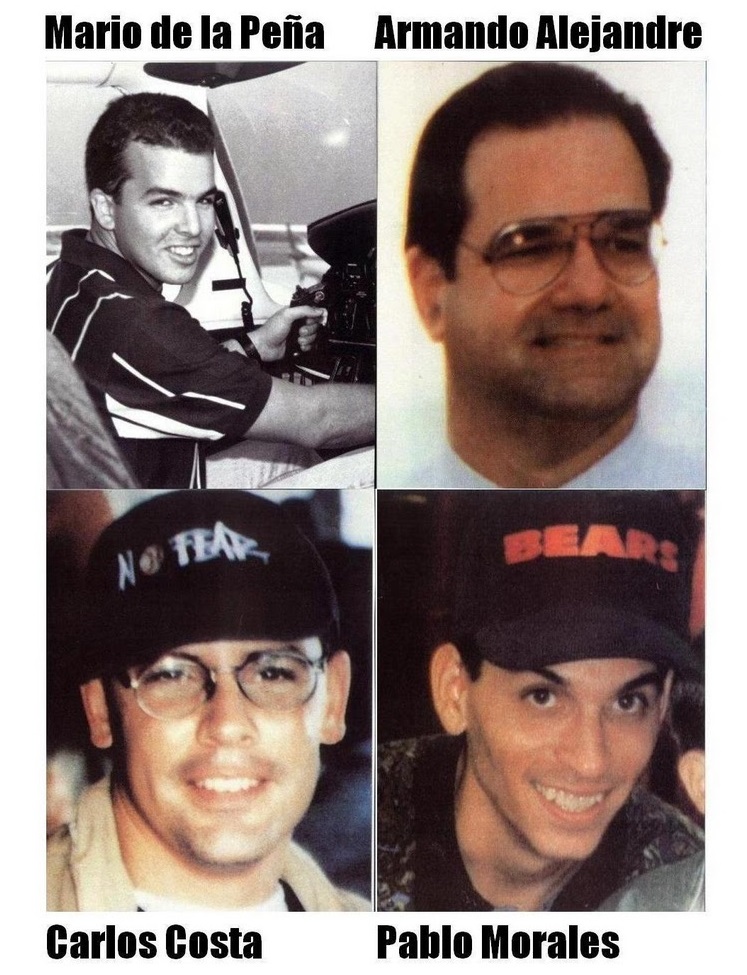 Vigil hosted at the main fountain at Florida International University between 3:21pm and 3:27pm the times that two Brothers to the Rescue planes were destroyed by air-to-air missiles fired by Cuban MiGs as they flew through international airspace searching for rafters.

Family members and friends of Carlos Costa, Pablo Morales, Mario De La Peña and Armando Alejandre Jr. will be in attendance. This event is for FIU students and members of the FIU Community and has been held annually since 1996.

Fact Sheet on February 24, 1996 Brothers to the Rescue Shoot down

February 24, 1996 shoot down was an act of state terrorism that blew two civilian aircraft out of the sky with air to air missiles while in international airspace after regime planned the act months beforehand with its espionage network in the United States.

FACT 1: By definition: Terrorism is the calculated use of violence (or the threat of violence) against civilians in order to attain goals that are political or religious or ideological in nature; this is done through intimidation or coercion or instilling fear)
http://wordnetweb.princeton.edu/perl/webwn?s=terrorism

FACT 2: Cuba is responsible for violating the right to life (Article I of the American Declaration of the Rights and Duties of Man) to the detriment of Carlos Costa, Pablo Morales, Mario De La Peña, and Armando Alejandre, who died as a result of the direct actions of its agents on the afternoon of 24 February 1996 while flying through international airspace.

FACT 3: Cuba is responsible for violating the right to a fair trial (Article XVIII of the American Declaration of the Rights and Duties of Man) to the detriment of the relatives of Carlos Costa, Pablo Morales, Mario De La Peña, and Armando Alejandre, in that to date the Cuban authorities have not conducted an exhaustive investigation with a view toward prosecuting and punishing the perpetrators and have not indemnified those same relatives for the damage they suffered as a result of those illicit acts.

Inter-American Commission on Human Rights September 29, 1999 Report on the Meritshttp://www.cidh.org/annualrep/99eng/Merits/Cuba11.589.htm