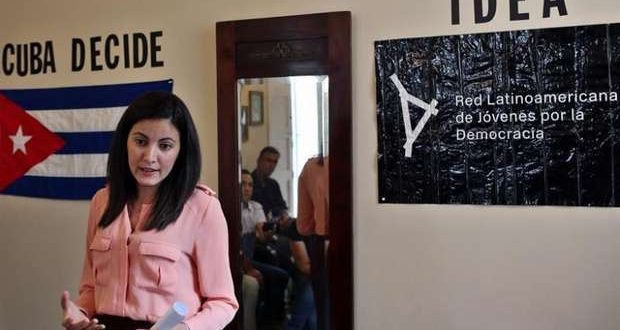 It is difficult, for the macho mentality that prevails among Cubans, to relate to a woman with bold attitudes that require determination and bravery. Regarding Rosa María Payá Acevedo, freelance journalist José Hugo Fernández said that “she has a graceful, elegant appearance, a candid look.”

This is the leader of the CubaDecides campaign and president of the Latin American Youth Network for Democracy, who received us at her family home in the Havana neighborhood of El Cerro to talk about the second annual Freedom and Life Oswaldo Payá Prize, on 8 March.

Ivan García/Leonardo Santos: Why is the ceremony for this award being held in Havana, knowing that the Cuban regime would deploy a campaign to discredit the event and prevent the participation of influential international political figures?

Rosa María Payá: We will never shape our actions based on the decisions and actions of the regime of Raúl Castro, but rather on what all Cubans can do for ourselves. The decision to deliver, for the second time, this award in Cuba is not only consistent with honoring the legacy of my father and honoring the winners of each year’s award, but also demonstrates to Cubans the support of the international community.

We must be able to generate actions, both inside and outside the Island, in favor of a peaceful change in our country, in favor of a change towards democracy, and as I expressed during the first prize ceremony, for this we must move the scene of our actions to Cuba.

What happened this week, where the Cuban regime for the second time has considered the participation of the international community in the delivery of theFreedom and Life Oswaldo Payá Prize as a political provocation, we can consider as a victory, because it made clear the tolerances that still exist, in the international community, with respect to the Castro dictatorship.

García/Santos: In the first installment of the award, in February 2017, the regime denied entry to Cuba to Luis Almagro, secretary general of the OAS, former Chilean minister Mariana Aylwin and former Mexican President Felipe Calderón. On this occasion, the regime denied entry to presidents Jorge Quiroga and Andrés Pastrana and Chilean deputy Jaime Bellolio, among others. How do these actions hurt the Cuban regime ahead of the VIII Summit of the Americas to be held on April 13 and 14, in Lima, Peru?

Rosa María Payá: It is incoherent that there is a dignified position in the face of the Venezuelan dictatorship perpetuated in the figure of the dictator Nicolás Maduro and that the same treatment should not be assumed before the Cuban dictatorship perpetuated in Raúl Castro. The position of the Peruvian government and the Lima Group, declaring Nicolás Maduro not welcome for the next Summit of the Americas, is truly worthy.

The Cuban regime, which describes its electoral farce as transparent, nevertheless refuses to allow entry into the country of two presidents who were democratically elected.

On the other hand, it is impossible to conceive the collapse of democracy in Venezuela, Bolivia and Nicaragua without the concrete and active interference of the Cuban regime. I think all these considerations should be addressed seriously during this summit. The Secretary General of the OAS said clearly that dictatorships are not welcome.

García/Santos: Sectors of the opposition on the island have described CubaDecides, and its call for a binding plebiscite, as a “fanciful, ineffective and electioneering” endeavor.

Rosa María Payá: CubaDecides is a campaign for all Cubans and for all non-Cubans who support the right of Cubans to decide. The right to decide about how a nation operates, and the citizens that compose it, to determine its present and its destiny. To be against this basic principle is to be against democracy itself. And that basic principle is what CubaDecides defends.

CubaDecides is a citizen mobilization campaign to change the system and begin a process of transition towards democracy. The conditions for this transition to occur are based on the fact that there must be freedom of expression, freedom of association, access to information, and a combating of repression. These things are demanded by CubaDecides, and if that is not what the Cuban opposition wants, then what does it want?

However, all are welcome to join a decisive struggle for freedom. A fight that will end the day there are free elections in Cuba. The change in Cuba will not come from whomever will be the next candidate, because the change has to be radical and for this all Cubans should have the opportunity to participate in that change.

The CubaDecides campaign does not propose to speak for the Cuban people because nobody else should speak for all Cubans. Let’s ask the people, in a plebiscite, what they want.

García/Santos: The doctor Eduardo Cardet, leader of the Christian Liberation Movement among whose founders was your father Oswaldo Payá Sardiñas, has been imprisoned since November 30, 2016. His family has recently stated that his case “has not had all the desired repercussions.”

Both since the CubaDecides campaign and the Latin American Youth Network for Democracy, we have been carrying out actions for the release of all political prisoners and specifically for the release of Eduardo Cardet, whom the regime has targeted so particularly.

We are not only worried about his freedom, but also about his physical integrity and that of his family. It is a priority for the Network to take the case of Eduardo Cardet to the Summit of the Americas.