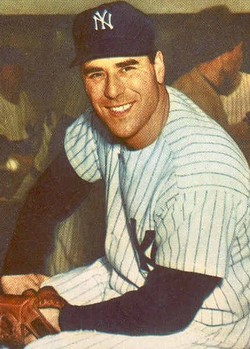 As my late father used to say, Cubans were big Yankee fans.    It made sense.   The Yankees were the great team of their time.   The team won and Cubans like my father used to follow the World Series on radio and later TV.

On May 1, 1951, Orestes Minoso made his major league debut in style.   He hit a HR off of Vic Raschi, the great Yankee starting pitcher.

We remember Victor John Angelo Raschi who was born in West Springfield, Massachusetts, on this day in 1919.   He died in 1988.

Raschi won 63 over the next 3 seasons, 21 each year. He was part of a great pitching rotation along with Allie Reynolds and Eddie Lopat.