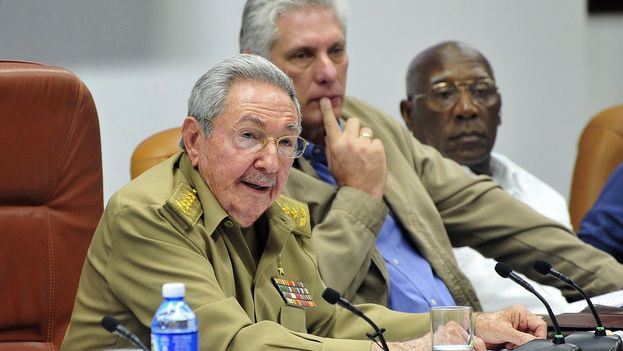 The Communist Party of Cuba (PCC) will maintain the “leading role in Cuban society” and socialism will remain “irrevocable” after the Constitution reform, now underway on the island, is concluded this week by the 5th Plenum of the Central Committee of the Communist Party, the only political organization allowed on the Island.

The promised reform of the Electoral Law, announced by Castro in early 2015 to be completed in time this legislature, was not addressed during the 5th Plenary, or at least any discussion of it has not been mentioned by the official press.

Chaired by Raúl Castro Ruz, first secretary of the PCC,the plenary session held in recent days is the last before the next president of the Council of State is appointed on April 19, a position that is expected to fall into the hands of the current first vice president Miguel Díaz-Canel.

The meeting was dedicated to assessing the obstacles to the implementation of economic policy, an analysis that comes at a time of uncertainty for the private sector, which as of last August has seen a halt on the issuing of new licenses for the most important activities.

In the plenary it was announced that “the highest legal standards have already been signed” which will regulate private enterprise, but the date on which they will take effect was not specified.

Participants in the plenary pointed to the dual currency system as a priority to be addressed, and “in particular the studies on monetary and exchange unification,” but the calendar did not specify actions on the most important reforms pending in the country.

The elimination of the dual monetary system, consisting of the Cuban peso (CUP) and the convertible peso (CUC), has been, for decades, a demand from the most disadvantaged sectors and economists, who attribute many of the problems that do not allow the economy of the Island to take off to the existence of two currencies.

Last December, in the closing speech of a parliamentary session, Castro insisted on the urgency of unifying the currencies. His words triggered reactions such as the compulsive purchase of dollars, long lines at banks to deposit money and the refusal of many merchants to accept the CUC, out of fear it would lose value in the unification.

The meeting also addressed the housing situation in the country. Data from the most recent Population Census conducted in 2012 counts 3,824,000 houses, of which 39% “is in regular and poor condition,” according to the official Granma newspaper.

The Government seeks to alleviate this situation with “investments in the cement industry and the expansion of local production of materials, installing 423 mini-industries in municipalities and people’s councils, in addition to those already operating in the territories.”

Marino Murillo Jorge, known as the “Tsar of reforms,” presented the results of a review of “all the policies” applied in recent years in the economic field, to learn in depth what has gone well and what should be rectified.

Since the first Raulist reforms began to be implemented in 2010, the Government has applied some 100 guidelines that focus on new arrangements for foreign investment and the opening of the private sector. The latter currently employs some 580,000 people who fear new and more restrictive regulations.

The lack of coordination between state entities and organizations and the “limited vision on risk levels and incomplete appreciation of costs and benefits” are some of the errors that Murillo points out as burdens keeping the Island’s economy from taking off.

The members of the Central Committee lamented “the lack of a tax culture in the country” and the “deficient use of accounting as a fundamental tool for any economic analysis.” Castro stressed that “a wasteful mentality persists” and called for facing the problems “without a hint of pessimism.”

1 thought on “Reports from Cuba: Cuba’s constitutional reform will keep the Communist Party as ‘leader’ of society”