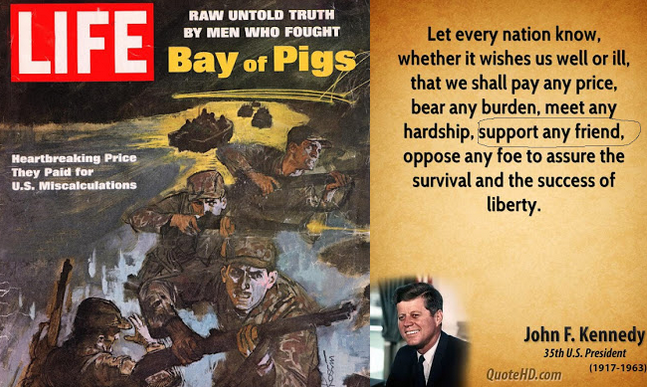 They were known as La Brigada 2506, an almost precise cross-section of Cuban society of the time. The Brigada included men from every social strata and race in Cuba — from sugar cane planters to sugar cane cutters, from aristocrats to their chauffeurs. But mostly, the folks in between, as befit a nation with a larger middle class than most of Europe.

Short on battle experience, yes, but they fairly burst with what Bonaparte and George Patton valued most in a soldier: morale. No navel-gazing about “why they hate us” or the merits of “regime change” for them. They’d seen Castroism point-blank.

Their goals were crystal-clear: firing-squads silenced, families reunited, tens of thousands freed from prisons, torture chambers and concentration camps. We see it on the History Channel after our GI’s took places like Manila and Munich.

Well, in 1961 newsreels could have captured such scenes without crossing oceans. When those Cuban freedom-fighters hit the beach at the Bay of Pigs, one of every 18 Cubans suffered in Castro Gulag. Mass graves dotted the Cuban countryside, piled with hundreds who’d crumpled in front of Castro and Che Guevara’s firing squads. Most of the invaders had loved-ones among the above. Modern history records few soldiers with the burning morale of the Bay of Pigs freedom-fighters.

When the smoke cleared and their ammo had been expended to the very last bullet, when a hundred of them lay dead and hundreds more wounded, after three days of relentless battle, barely 1,400 of them — without air support (from the U.S. Carriers just offshore) and without a single supporting shot by naval artillery (from U.S. cruisers and destroyers poised just offshore) — had squared off against 21,000 Castro troops, his entire air force and squadrons of Soviet tanks. The Cuban freedom-fighters inflicted over 3000 casualties on their Soviet-armed and led enemies. This feat of arms still amazes professional military men.

“They fought magnificently and were not defeated,” stressed Marine Col. Jack Hawkins a multi-decorated WWII and Korea vet who helped train them. “They were abandoned on the beach without the supplies and support promised by their sponsor, the Government of the United States.”

(In Dec. 1962 at Homestead AFB some of modern history’s most unsung heroes return to their loved ones–who long  assumed they were widows and orphans…

Joyous and teary bedlam at Homestead AFB on Dec. 24th 1962 as surviving Bay of Pigs freedom-fighters return to their families after almost two years in Castro’s prisons and torture chambers. 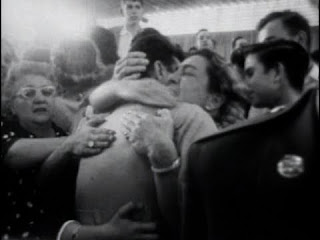 “Never in the field of human conflict (would) so much (have been) owed to so few by so many (but for some air-strikes.) 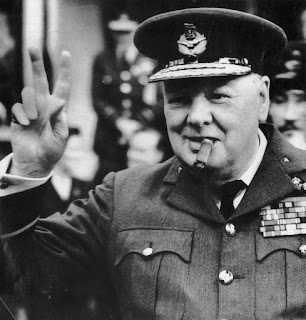 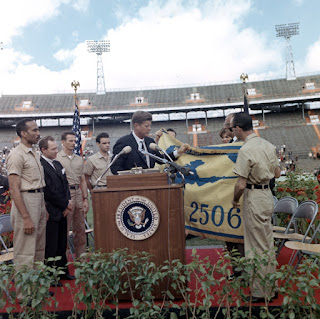 Our friends at History News Network help disseminate some items not well-understood outside the tiny Cuban-American informational ghetto.