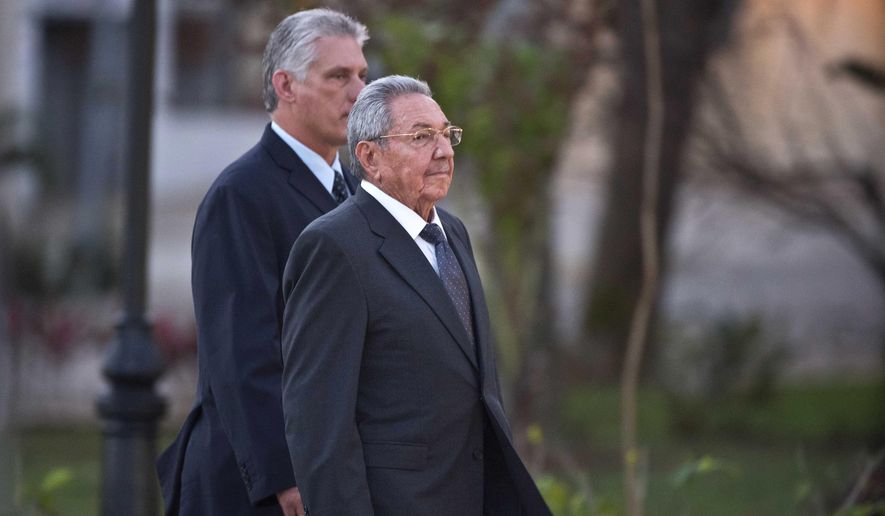 Anyone who believes the “retirement” of dictator Raul Castro and the installation of his puppet president signals the “end of the Castro era” in Cuba is either dishonest or painfully ignorant of history. The Castro family dictatorship is deeply entrenched and controls everything in Cuba. Regardless of the political theater the apartheid regime put on to distract the population and entertain the foreign press, the Castro dictatorship has no intentions whatsoever of releasing its death grip on power.

The End Of The Castro Era. Really?

The announcement that aging Cuban dictator Raúl Castro was stepping down as president triggered considerable media speculation that the oppressed, impoverished island of Cuba might experience a new era of liberalization. Alas, this is wishful thinking, argues Néstor Carbonell, at least as long as Castro and his hardline cronies are still alive. Carbonell, a refugee from this terrible regime, provides here a clear-eyed assessment of the current scene and what the U.S. should do to foster a better future for Cuba. He knows whereof he speaks. Always an opponent of the communist takeover, Carbonell participated in the unsuccessful 1961 Bay of Pigs invasion to topple the regime. He subsequently rebuilt his life in the United States.

TWO SENSATIONAL headlines recently flashed around the globe: “Cuba Now Has the First Non-Castro President in Nearly 60 Years” and “This Marks the End of the Castro Era.” Neither is true.

From January to July 1959 Cuba had a non-Castro president, Judge Manuel Urrutia, who was hand-picked by Fidel and who had upheld the rebels’ right to fight against the Batista dictatorship. Since Urrutia was only a figurehead with no effective power, Cubans dubbed him the “spoon” president, because he could neither pinch nor cut.

In July 1959 Urrutia dared to warn the nation that the communists were increasing their nefarious influence over the government. Prime Minister Fidel Castro responded by lambasting Urrutia in a four-hour television harangue, accusing him of divisiveness and treason, and forcing him to resign. Following this TV coup d’etat, Urrutia sought diplomatic asylum in the Venezuelan embassy and refuge in the U.S., where he died in 1981.

Fidel appointed another non-Castro replacement as president, Osvaldo Dorticos. A longstanding Marxist attorney, Dorticos didn’t deviate from the Party line and remained subservient to the Maximum Leader (Fidel) during his presidency, from mid-1959 to 1976. Suffering from a spinal ailment and depression, Dorticos shot and killed himself in 1983.

A few days ago another non-Castro was anointed president of the regime’s Council of State and Council of Ministers: a 58-year-old electrical engineer and submissive apparatchik, Miguel Díaz-Canel. Raúl Castro had selected Díaz-Canel as his replacement, and the rubber-stamp National Assembly promptly ratified the appointment with totalitarian obeisance—but for a single exception, the vote was unanimous.

Born one year after the Castro brothers seized power in January 1959, Díaz-Canel lacks revolutionary credentials, leadership standing and gravitas. Rising discreetly through the ranks of the Communist Party, from provincial posts to minister of higher education and first vice president of the Council of State, the opaque Díaz-Canel has left no trail of independent thinking or salient achievements. Perhaps because of that, he gained the full backing of Raúl, who will continue to call the shots as head of the Communist Party and army supremo until 2021.

Some have described Díaz-Canel as a level-headed pragmatist and consensus-builder, not tied to the past, who will introduce substantial political and economic reforms to unify and revitalize the country.  Is there any basis for that belief? Not really. In fact, consistent with his communist militancy and ideology, Díaz-Canel blasted the U.S. in a speech last year for its insistence that the regime usher in a democratic transition. “Imperialism can never be trusted, not even a tiny bit, never,” he asserted. And in a leaked video of a Communist Party meeting, he lashed out against self-employed entrepreneurs and vowed a crackdown on dissidents and independent media, saying that they were paid by foreign actors to spike dissent.

In his acceptance speech Díaz-Canel pledged “preservation of the [updated] communist system, continuity of the Cuban revolution and [readiness] to confront imperialism.” An unabashed sycophant, he swore unconditional allegiance to the first secretary of the Communist Party (Raúl Castro), who “will lead the decisions about the future of the country.”