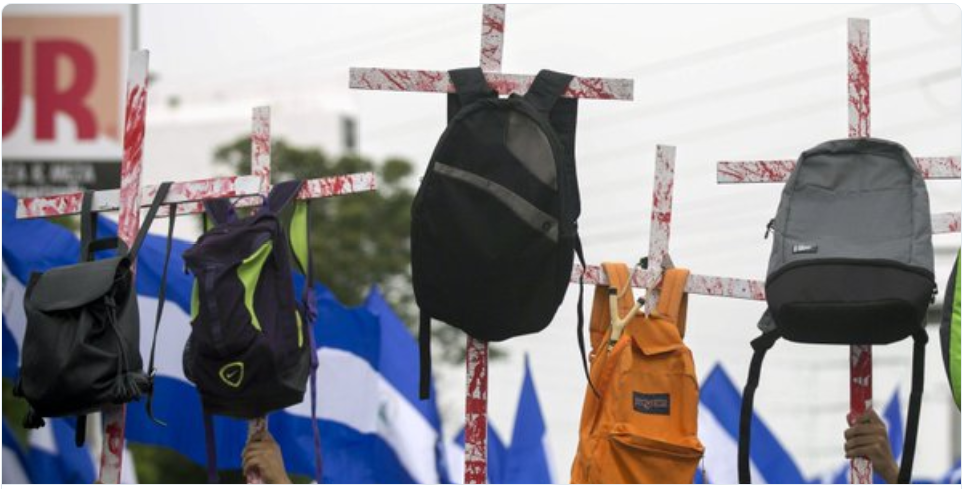 Today thousands of Nicaraguans are marching in Managua in support of the Bishops mediating the conflict that began on April 18, 2018 when the Ortega regime sent paramilitaries and Sandinista militants to violently put down peaceful protests and shutting down the free press. At least 448 killed over a hundred days of protests in Nicaragua.

Agence France Press reported yesterday that more than a dozen doctors, nurses, and technical staff in a public hospital in Nicaragua were fired because they treated wounded anti-government protesters. The Associated Press reported that eight public hospital doctors in Nicaragua said Friday that they have been fired after violating alleged orders not to treat wounded protesters opposing President Daniel Ortega’s government.

Daniel Ortega and the Sandinista Party are not alone in their bloody crackdown but also torture victims reported hearing Cuban and Venezuelan accents in secret prisons. Raul Castro on July 26th linked up the three countries saying: “For us, the same as for Venezuela and Nicaragua, it’s very clear that the noose is tightening, and our people need to be ready to respond to every challenge with unity.”

On July 16-17, 2018 in Havana, Cuba the São Paulo Forum celebrated the victory at the ballot box of Andrés Manuel López Obrador (AMLO) in Mexico, and unconditionally defended Daniel Ortega and the Sandinista regime in Nicaragua despite the ongoing massacres of anti-government protesters.

In 1990 following a request made by Fidel Castro to Lula Da Silva the Sao Paulo Forum was established with the goal: “To reconquer in Latin America all that we lost in East Europe.”  The FSP is a communist network comprised of over 100 left wing political parties, various social movements, and guerrilla terrorist organizations such as the Fuerzas Armadas Revolucionarias de Colombia (FARC) and the Chilean Movimiento de la Izquierda Revolucionaria (MIR)