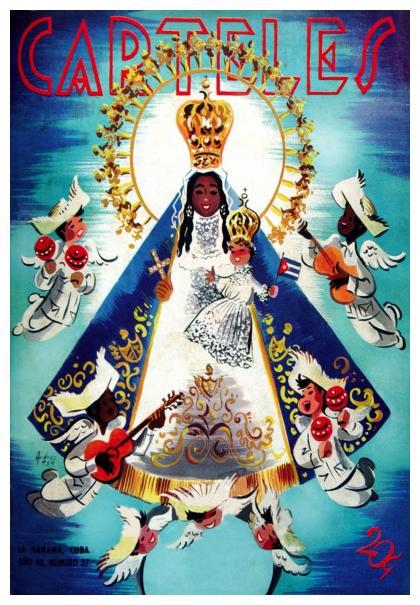 Today, the 8th of September, is celebrated by Catholics around the world as the Feast of the Nativity of the Blessed Virgin Mary.

Among Cubans, the feast focuses on one of the many local identities of the ultimate Jewish mother, the Blessed Virgin Mary, and that identity is linked to the miraculous apparition of an image floating on the sea.

The Catholic world is full of such miraculous images that suddenly appear on earth, at some location.  In the Eastern Orthodox Church, such images of unearthly origin are known as acheiropoieta, which loosely translated means “icons not made by human hands.”

The image of the Virgin of Guadalupe in Mexico is perhaps the best known of all of these icons, but far from the only one in Hispanic Catholicism.

Cuba’s own  acheiropoieta is an image that three Cuban fishermen suddenly found bobbing in the waves, in the turquoise sea of the Bay of Nipe in eastern Cuba, in the early 17th century.  According to legend all three men were named Juan.  Two of them were supposedly of native descent, the third was an African slave.

That image, now enshrined at El Cobre, is Cuba’s most highly revered icon.  And Our Lady of Charity (Nuestra Señora de la Caridad), a title given to Mary centuries ago by the faithful, was officially declared Patroness of Cuba by Pope Benedict XV in the early 20th century. 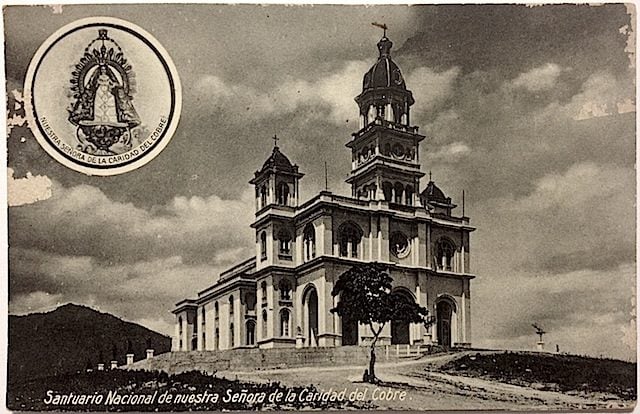 Cubans in exile have continued to venerate Our Lady of Charity.  In Miami, she has a shrine of her own.  In Chicago, where there were fewer Cubans, the best we could do is to install an image of Nuestra Señora de la Caridad at the parish church of St. Ita, on the North Side, in a formerly Irish-Greek-Japanese-German-Swedish-Jewish neighborhood that filled with Cubans very quickly in the 1960’s, as all those other ethnic groups were starting to move to the suburbs.

The image is still there.  And every September 8, the few Cubans who remain in Chicago gather at St. Ita’s for Mass.  Or, so I’m told…

My mother never missed the chance to attend while she could still walk.  After she was confined to a wheelchair, it became more difficult for her to join her friends at St. Ita’s, which we all pronounced as “Santaita,” because the church entrance had many steps and no elevator, but she often found friends kind enough to drive her there and pull that wheelchair up, step by step.

Her funeral Mass was held there, at St. Ita’s, and that was the last time I had a chance to see that image of Nuestra Señora, which was not easily affordable to those Cubans who arrived in Chicago penniless and ended up working minimum-wage jobs.

One might argue that image might have been the most Cuban thing in all of Chicago, tucked away in her own little niche, in a dark corner of a gothic stone church built by Irish immigrants.  That parish is now full of Central American immigrants, and that Cuban image keeps an eye on them.

So it goes…. faith and cultural identity are crucial to everyone’s self-definition, especially in exile.

And now, as always, Our Lady of Charity is as Cuban as she is universal.  May she help rid the world of the cruelty, stupidity, envy, intolerance, and racism that plague the human race and which have turned Cuba itself into one of the worst circles of Hell.

Holy Mary, Mother of God, pray for us sinners now and in the our of our death… Amen…. Imagine having to count how many times this prayer has been uttered for the past two millennia…

For the full story of this feast, here’s a brief piece from Franciscan Media:

The Story of the Nativity of the Blessed Virgin Mary

The Church has celebrated Mary’s birth since at least the sixth century. A September birth was chosen because the Eastern Church begins its Church year with September. The September 8 date helped determine the date for the feast of the Immaculate Conception on December 8.

Scripture does not give an account of Mary’s birth. However, the apocryphal Protoevangelium of James fills in the gap. This work has no historical value, but it does reflect the development of Christian piety. According to this account, Anna and Joachim are infertile but pray for a child. They receive the promise of a child who will advance God’s plan of salvation for the world. Such a story, like many biblical counterparts, stresses the special presence of God in Mary’s life from the beginning.

Saint Augustine connects Mary’s birth with Jesus’ saving work. He tells the earth to rejoice and shine forth in the light of her birth. “She is the flower of the field from whom bloomed the precious lily of the valley. Through her birth the nature inherited from our first parents is changed.” The opening prayer at Mass speaks of the birth of Mary’s Son as the dawn of our salvation, and asks for an increase of peace.

We can see every human birth as a call for new hope in the world. The love of two human beings has joined with God in his creative work. The loving parents have shown hope in a world filled with travail. The new child has the potential to be a channel of God’s love and peace to the world.

This is all true in a magnificent way in Mary. If Jesus is the perfect expression of God’s love, Mary is the foreshadowing of that love. If Jesus has brought the fullness of salvation, Mary is its dawning.

Birthday celebrations bring happiness to the celebrant as well as to family and friends. Next to the birth of Jesus, Mary’s birth offers the greatest possible happiness to the world. Each time we celebrate her birth, we can confidently hope for an increase of peace in our hearts and in the world at large.

2 thoughts on “Happy Feast of the Nativity of the Blessed Virgin Mary, observed by Cubans as the feast of Nuestra Señora de la Caridad”