“Talk about a power lunch: Cuba leader Fidel Castro broke bread last week with a group of Hollywood titans, including CBS Television CEO Leslie Moonves, and MTV Networks chief Tom Freston….The execs flew to Havana, toured the city and sat down for a 4-1/2-hour lunch with Castro. One exec familiar with the trip said the travelers found Castro “fascinating” and “charismatic.” (Variety, Feb, 2001.) 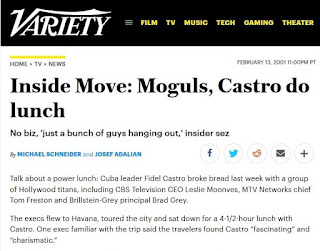 “CBS President and CEO Leslie Moonves and other television industry officials recently traveled to Cuba and had a private dinner with Castro. It appears the executives may have broken the law. (Accuracy in Media, Sept 10, 2001)

Why the executives went to Havana is not clear. But if a report in the New York Post on Feb. 15 is to be believed, they flew to Cuba in a private jet, stayed four days and had a blast.

“None of us had ever been to Cuba before,” one member of the group told the Post. “We went to the beach. We went to a lot of jazz clubs. And we drank a lot of white rum. . . . Cuba is the most romantic, soulful and sexy country I’ve ever been to in my life.” 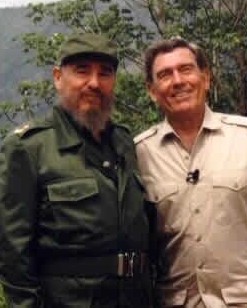 (Les Moonves’ employees Dan Rather and Mike Wallace yukking it up with the mass-murderering Stalinist who outlawed a free press on penalty of prison and firing squad–and who their boss, CBS chief Les Moonves  found “charismatic! and fascinating!”) 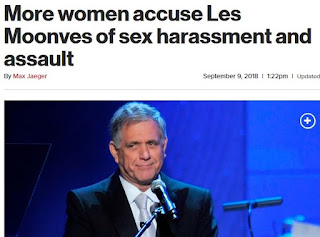 “New allegations are emerging. Six additional women are now accusing Moonves of sexual harassment or assault… They include claims that Moonves forced them to perform oral sex on him, that he exposed himself to them without their consent, and that he used physical violence and intimidation against them….One of the women with allegations against Moonves, a veteran television executive named Phyllis Golden-Gottlieb, told me that she filed a criminal complaint late last year with the Los Angeles Police Department, accusing Moonves of physically restraining her and forcing her to perform oral sex on him, and of exposing himself to her and violently throwing her against a wall in later incidents.”

(And NO–contrary to what CBS, Hollywood, NPR, etc. etc. etc. claim about Cuba–prostitution during Batista days was TRIVIAL compared to today…ASI QUE NO JODAN!–see here for documentation–But WARNING: this documentation contradicts Godfather 2! )

1 thought on “Accused sexual predator Les Moonves was visiting Cuba (child-sex capitol of our Hemisphere) for “drunken flings” way back in 2001–where he had private dinner with Fidel Castro, who he found “FASCINATING!” and CHARISMATIC!””