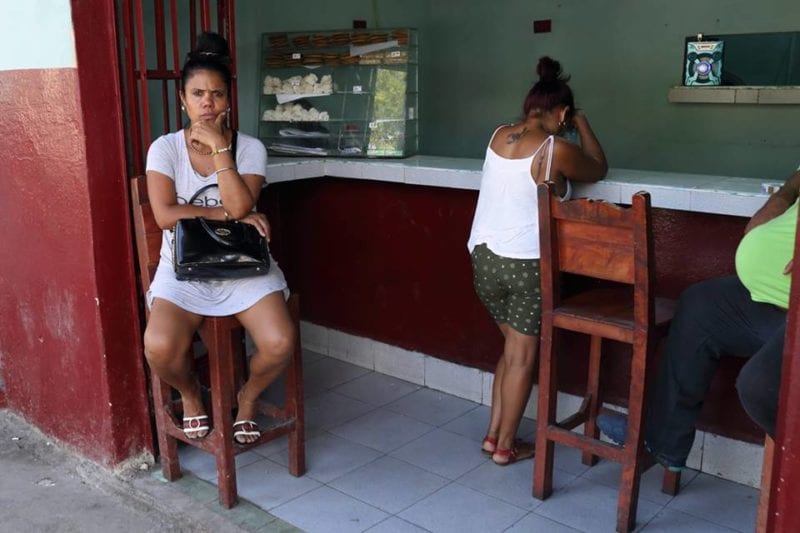 “A country’s achievements shouldn’t be defined by how many hotels are being built, but by the quality of a meal,” I heard a man say in line at the bakery. (He was referring to statistics that official media publish everywhere, which are so optimistic, biased, cynical).

Yes, this meal which for ordinary Cubans represents the climax of physical and mental efforts, the present guaranteed, a rest from uncertainty. Food which replaces intellectual dreams and dreams of the spirit, even vanity, condemning us to live in a never-ending primitive state.

People are already complaining everywhere, openly, making astute analyses about our economic reality, that I find myself asking how long we have left until the last veil falls.

The veil that will allow them to directly name the one responsible: the government, guilty of leading a disastrous administration which has made us not a third-world island, but completely cut off from the rhythm of the rest of the world.

However, not even the most playful dare to step outside the mold, where the dysfunctional status quo we suffer every day, remains afloat with bureaucrats, corruption, a lack of information, freedom (to speak, to act, to influence our own fates), in a swarm without any solutions.

However, we know that the blockade is an excuse that no longer convinces anyone. That the enemy country, or any first-world country, is the objective for real, possible, potential, imaginary migrants… Because young people are growing up feeding this loss of identity and an uprooting.

In 60 years, the national housing crisis, the transport crisis and wages crisis still haven’t been resolved! The problem of children not being able to ensure their parents are looked after because they can barely support their own offspring, or themselves.

That young women don’t want to give birth in a country with no future, that families need to accept being separated by exile, like they did in the ‘80s, ‘90s, in the first decade of the new millenium. Because Cuba continues to be a way station. A chaotic society where you can’t start a company, a business or a cultural event without suffering harassment, financial and political preessures. Meanwhile, progress always hangs in the balance between two alternatives: making a pact and selling your soul or standing up to the system and becoming a social outcast.

This compassionate veil which separates Cubans from the last reality that could be revealed if they just stopped reading the press, watching TV where we are shown an invented country. If only they stop sitting down with the Weekly Package or any jumble of movies, shows, series, telenovelas which hypnotize with other people’s stories, incapable of changing our lives.

It’s a fact that the media controls the world. If Cuban TV were to show the real Cuba we live in, people would take to the streets in revolt. Some might not do this to reclaim their civil rights, but their right to remain hypnotized.

If just for a day, the city with its broken streets and pavements, blocks and blocks in poor condition; with jam-packed buses, people being mistreated, bitter, their elderly all withered; meters of garbage and unbreathable vapors; the impossibility of living directly and honestly off of our income (without “diverting” which only humiliates and punishes us); if all of this were something we were forced to think about and reflect upon; the last veil would immediately come crashing down.

1 thought on “Reports from Cuba: Shock therapy in Cuba”