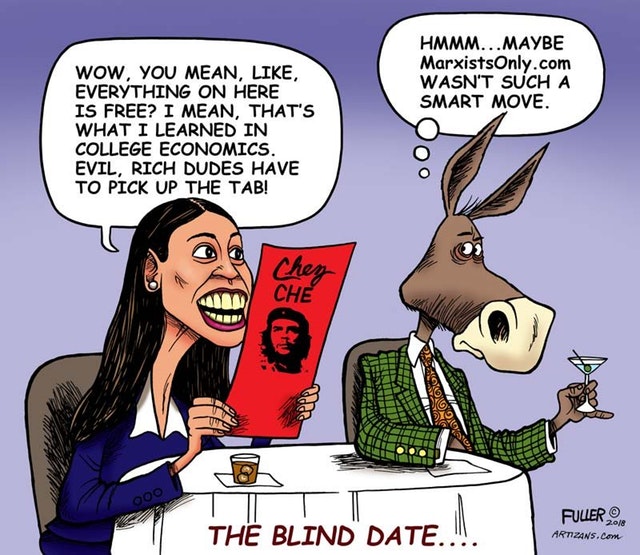 In Cuba, they forbid capitalism but pay for abortions.   Miss Ocasio-Cortez should pack up and move to Cuba.  She’d feel right at home!

As we celebrate another anniversary of “Roe v Wade”, or the termination of 50 million lives since 1973, we listened to Representative Alexandria Ocasio-Cortez talk about morality and the end of the world.

First, she did her best “Churchill” and warned about the gathering storm of climate change.  In fact, AOC is warning us that the world will end in 12 years:

“Millennials and people, you know, Gen Z and all these folks that will come after us are looking up and we’re like: ‘The world is gonna end in 12 years if we don’t address climate change and your biggest issue is how are we gonna pay for it?’” Ocasio-Cortez said.

Not sure what study she is referring to.  I do recall several other predictions about the world freezing, then melting and our coastlines flooded with bears swimming down the Mississippi.

Second, she raised the idea of the 70% tax.  Miss O-C has not put a proposal on the floor or published anything.  All we have our talking points about the morality of rich people commuting by helicopter and the rest of us taking crowded subways.

How is she going to pay for all of this?  It does not matter because it’s over in 12 years anyway.

As I listen to this young woman talk about morality, it reminds me that a million babies are aborted every year.  Miss O-C defends that as a “choice”.

The bad news is that we can look forward to another 12 million abortions over the next 12 years that planet Earth will be around.

The good news is that abortion will end in 12 years because “climate change” will end it all.

No matter what, we ask the same question:  How did this young woman get elected?