Great article over at ESPN Deportes today about Yadel Marti and Yasser Gomez. Whereas most recently defected athletes remain fairly quiet about politics and rarely denounce the regime, Marti and Gomez come out swinging against the Cuban authorities. They left Cuba because of its abuses, humiliations and injustices, and not necessarily for a chance to play in MLB. I wish them all the best of luck.

The possibility of an MLB career was not the primary reason pitcher Yadel Marti and outfielder Yasser Gomez left Cuba in a raft during the holidays.
The first and most important reason, according to them, was leaving a life of abuse, humiliation and injustices.
“We are tired that the authorities didn’t respect us and treat us like children,” said Marti said, Cuba’s best pitcher in the first World Baseball Classic in 2006.
“In Cuba, although we were good players, we were underestimated and disrespected. Injustices forced us to decide,” added Gomez.

For the past 50 years, Fidel Castro has accused the United States of America of being a racist country where people of color were disadvantaged. He convinced the vast majority of the Cuban population and the rest of the world that Cuba is a paradise where all its citizens are equal.
The United States of America has just elected a mixed-race President. All of Cuba was watching. All of Cuba was talking about it.
The question I have now:
What will all of Cuba do about it?
If Cuba is in fact a paradise where everyone is treated equally, why have they never been given the opportunity to elect a leader of color?
I pray they ask themselves this question and I hope the answer fills them with the anger and motivation to do something about it. Cambio.

I disagree with about 95% of this oped, and I loathe the fact that the author put Marx and Marti in the same sentence, but the second-to-last sentence poses a very interesting question:
“Which country, Cuba or the United States, will make the transition to democratic socialism first?”
Predictions?

I can’t believe I actually agree with Wayne Huizenga, who broke my 11-year old heart in 1997, but the man has a point:

Dolphins owner H. Wayne Huizenga said Sunday no date has been set for selling up to 45 percent more of the team to Stephen Ross, but the presidential election is among the issues weighing on his decision.
That’s because a Barack Obama administration is expected to mean higher capital-gains taxes.
“He wants to double the capital gains tax, or almost double it,” Huizenga said. “I’d rather give it to charity than to him.”

I voted for John McCain and Sarah Palin this week.
As a result, many of my liberal friends have “lost their respect for me.” It’s not just my friends, though. Anywhere I go in New York or Boston, I proceed to get attacked for not voting for Obama. Note, it’s not because I chose McCain, it’s because I didn’t vote for Obama. There have been instances when I actually felt afraid to express my political opinion. Yes, I am a strong Cuban woman and I was afraid to express my opinion. If that doesn’t speak volumes, then maybe the following phrases thrown at me will:
“Are you stupid?”
“Well then you’re an asshole.”
“I can’t believe you.”
“I thought you were smart.”
“I’ve lost so much respect for you.”
“You’re a selfish banker, you just want lower taxes.”
“It’s because you’re Cuban, isn’t it?”
Welcome to my life as a quiet, moderate Independent transplanted from Miami to the northeast. I rarely speak out about American politics; it’s just not my thing. I don’t like to argue with my friends. I like to laugh and joke with them, but since we went to school in Boston that means I have to avoid politics.
After extensively following the primaries, I decided to vote for John McCain. I’m not going to go into the drivers behind this decision – that’s not the topic I wish to address here.
Most of my acquaintances didn’t know I decided to vote for McCain until recently. I only talked about it with fellow supporters in hushed tones, over the Internet, or in empty rooms, but after a certain point I couldn’t keep it in anymore. People noticed the pained expressions on my face when Obama’s “awesomeness” became the topic of discussion. Now, they attack me.
One of my closest friends, who knows how passionate and proud I am of my Cuban heritage, actually compared the Cuban flag to the Confederate flag. Why? She decided that I’m only voting for McCain as a result of the influence of the Cuban-American community. I don’t know how she went from Cuban to Confederate, but she might as well have stabbed me with a knife and ripped out my heart.
Don’t get me wrong here — I love the passion and zeal this election has provoked in our country. It’s about time the general public began to care about and engage in a national election.
I do, however, hate the overzealousness with which Obama’s supporters are approaching this election. I can’t help but think that this is how it felt to be skeptical or critical of Fidel Castro in Cuba circa 1959. I would never say anything like the above quotes to any of my friends. I respect that they idealistically believe that their candidate can do the job. I disagree with them, but I would never insult them for their beliefs.
Debate and free thought are some of the fundamental values of this country, or so I thought. Last time I checked, antagonism and condescension were not qualities embraced by our founding fathers. The fact that I frequently encounter these traits amongst Obama supporters scares the living daylights out of me. This country doesn’t feel like a free country anymore. Instead of conversing, they attack. Instead of debating, they judge. Instead of respecting, they scorn.

This post is long overdue and I apologize for that. As stated in previous posts, I attended the USA vs Cuba World Cup Qualifier match on October 11 in Washington, D.C. It was an amazing and unforgettable experience for me for many reasons.
I equipped myself with 1) a Cuban flag, 2) an American flag and 3) a t-shirt I found fitting for the occasion “Made in the U.S.A. with Cuban parts”… shipped to me straight from la Calle Ocho.
I went with a few non-Cuban soccer fan friends from college… in other words, not as part of a rambunctious Cuban-American group. Prior to the game, I realized that I had never sung the Cuban national anthem before. I made it a point to memorize the anthem and sang it with the few other Cuban-Americans in the stands, with the players, and with the delegation from Cuba. Talk about conflicting emotions…
What I don’t understand is how the Cuban players can sing the following verse:

Everyone in Cuba has been living in chains for the past 50 years… especially the athletes.
But I digress. U.S.A. scored right away, the first of six goals, but the game itself wasn’t as eventful for me as the people and encounters I experienced.
I met a few girls in the bathroom with “Cuba B.C.” shirts — Cuba Before Castro. It was awesome — and a big relief for me to know that there were others in the stands who shared my passion and viewpoints.
But, I froze when several people decked out head-to-toe in Cuba gear walked by me on two separate occasions. I know you can’t get that sort of apparel in the United States, and I assumed they were part of some sort of official delegation. I totally froze. So many things wanted to come out of my mouth, but all I did was put more beer in it. I still debate whether or not I should have tried to start a conversation…
The game ended with a triumphant 6-1 U.S.A. victory, but the best part was the three old men who, as they were walking out of the stadium, began to yell “Cuba Si! Castro No!” I didn’t freeze that time… I joined them loud and clear. Maybe the beer had a little bit to do with it but hell, I had been dying to do it all night. 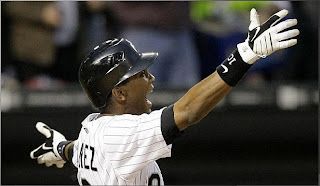 Alexei Ramirez. His teammates have nicknamed him the “Cuban Missile.” Never before has a position player from Cuba made such a splash in his rookie year. Only Livan Hernandez’s rookie year can compare to Ramirez’s efforts this season with the Chicago White Sox.
First, Ramirez became the first Cuban position player to ever go straight to the Major Leagues without spending time in the Minors. If you recall, Alexei defected from Cuba to the Dominican Republic last fall. He was signed as a free agent by the White Sox in December.
Ramirez is 27 years old, hailing from Pinar Del Rio. He’s 6’3” but only 185 pounds. Yet, he hit 21 home runs over 136 games including FOUR grand slams. FOUR. In his FIRST season. Many baseball greats have gone years before hitting their first grand slam.
One of the four came in the critical one-game playoff on Monday between the White Sox and the Twins. That slam led Chicago to the American League Division Series. The White Sox will play the first game of the series this afternoon vs. Tampa Bay.
Alexei was named the American League Rookie of the Month in August and could be a dark horse for Rookie of the Year.
Congratulations Alexei! Best of luck to him in the playoffs.
My previous posts on Alexei:
Pelotero
Update on former topics
Castro flip-flops on his pledge – names Cuban defectors

Vacations are typically for relaxing and taking in new sights and sounds. Most people wouldn’t choose to spend their vacations educating people about politics, but most people aren’t Cuban-Americans, either.
My parents had been planning their vacation to Chile and Argentina for over six months. They planned an extensive two-week tour of the southern tip of South America, with stops at four different hotels in three different countries. Sounds fantastic, huh?
And fantastic it was, though I bet those argentinos couldn’t wait to get rid of those pesky cubanos-americanos. My mom and dad found themselves defending their views on daily basis, whether they interacted with fellow American tourists or local cab drivers. Everywhere my parents went, people were either sympathetic to the Castro regime or just completely oblivious.
Many topics were covered, from the embargo to the truth about Che Guevara. It’s a good thing my mom reads Babalu on a daily basis!
My parents served their patriotic duty, unlike all the tourists in Cuba that Henry spotlights in his posts. Thanks Mom & Dad, for sucking it up and talking politics with ignorant people on practically every single day of your two-week vacation.
How many of you have encountered similar situations while on vacation? Let’s hear it in the comments.

Last night’s match was a close one as Claudia pointed out in her earlier post, which only makes the October 11 match-up even more exciting. I hope the Cuban players see the Washington Monument, the Capitol Building and the Lincoln Memorial when they fly in to D.C. (so I hope they fly in to Ronald Reagan). I hope they’re awed and moved by the sights and the freedom they stand for.
I just got tickets this week for the USA vs. Cuba World Cup Qualifier match being held in Washington, D.C. on October 11th. The match starts at 7:00 PM. Tickets are still very available and are pretty affordable too.
Get your tickets here: http://www.ticketmaster.com/event/1500410CA6F55DD0
Let me know if you’re going. I’m going to design a shirt soon, something anti-Castro/pro-Cuban. I’m currently thinking “Futbolistas Si, Castro No” in the front and “Cambio para Cuba” in the back. I’ll put the shirt online somewhere so you can order if you’d like. Feel free to drop design ideas in the comments.