Skip to content
El Memorial 2003.  We will never forget, because as Val wrote back in 2005,  the crosses placed in a field  to represent the hundreds of thousands of Cubans and others whose deaths are attributed to the brutality of fidel castro’s regime, and are  as quoted, ”For me,” said Marta Tamargo, who gave birth to her son Leopoldo in Havana just as Castro was consolidating power,  “they all are relatives.”

Visit the new Cuban Memorial Monument now, so you can tell your children and grandchildren than you were there, part of its construction and what will be written in the future.
The Cuban Memorial will be an eternal condemnation of the castrocomunista regime.

The world’s largest Cuban flag, and soon these walls will be enscribed with the names of the martyrs and victims of castrocomunismo.

The most beautiful lonely star you’ve ever seen in your life.
CUBAN, YOU HAVE THE LAST WORD!
And all this is at your fingertips, visit now and until finished,  you will be part of this story that began in 2003 and which will soon become a reality.

The design was done by Cuba architect Wilfredo Borroto, of the construction company MCM, owned by the Munilla brothers.  The fundraising efforts realized in these photos, and the site was obtained thanks to the efforts, tenacity, and dedication of the Commissioner of Miami-Dade County, Joe Martinez, candidate for Mayor of Miami-Dade County.

Who are those who have had, the will, determination, perseverance, and patience to start and achieve what your eyes are seeing?

The Committee which has been in charge of the Cuban Memorial from the outset: Renato Gomez, Coordinator; Francisco García, Sub-Coordinador and press spokesman;

Please visit the Monument and send your donation of check or Money order to:

The Cuban Memorial is a 501 c 3 Corporation, nonprofit and donations are tax-deductible to the fullest extent permitted by law.
Information submitted in Spanish by: Jesús Angulo www.jesusanguloguines.com

I spent both Saturday and Sunday at the Cuban Memorial helping Maria Werlau of the Cuba Archive. Together and along with a couple other volunteers including Jorge from The Real Cuba, we took testimonials from folks who had family or friends die as a result of the castro regime. It would be impossible to accurately describe the gamut of emotions I felt throughout the two days and there isnt enough bandwidth to write and carry all of the heartbreaking recollections I heard this weekend. There are a few moments, however, that touched me deeply, and which I will try to relate to you in the next few days. I can’t help but start with the following:

There were almost ten thousand symbolic crosses placed on the Tamiami Park field this year. Each with a name of a victim, the date of his or her passing and the location. The way these symbolic tombstones are placed, and the way they appear before you remind you somewhat of Arlington National cemetery, except, of course, that the loved ones these crosses represent are not buried below the crosses that bear their names.

Still, though, people knelt in front of the crosses and talked. They prayed. They brought flowers and photographs. They placed cards and notes. They wept at the feet of these symbolic crosses just the same.

The first testimonial I took down was from an elderly man, possibly in his late sixties. We had forms that asked all the pertinent questions: Loved one’s name, any nickname he or she may have had, place of birth, date of death, location of death and a couple other questions such as additional information or or pertinent information relative to the person’s passing.

At the bottom of the form we’d fill out the information of the person giving the testimonial.

I filled out all the information about this man’s loved one’s death and then asked him his own name. Both he and the person he was giving testimonial for had the same last name.

“What is your relation to the deceased,” I asked. “Brother, cousin…?”

The old man looked up at me, pursed his lips and swallowed hard. His index finger tapped nervously on the table and his eyes began to water: 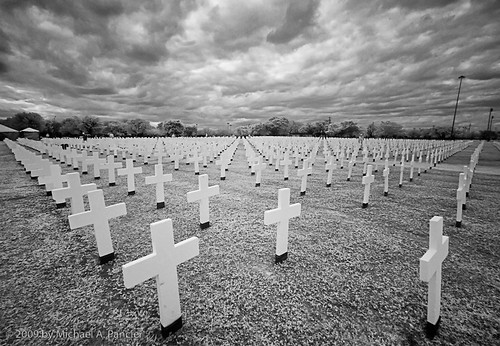 Stopped by the Memorial this morning to photograph it. Not much sun, but I think this image captured it well.