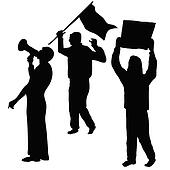 For weeks, we’ve been hearing about the Dallas mega immigration march. Well, the day came and the march wasn’t mega. In fact, the news reports were not very encouraging:

The turnout was far smaller but more diverse than the crowd that gathered 11 years ago at the first Mega March for immigration reform.

Protesters walked across downtown, from the Cathedral Shrine of the Virgin of Guadalupe to City Hall Plaza. There, speakers addressed an audience police estimated at 3,200.

We were told that the march was more diverse, i.e. refugee issues.

The lack of a crowd should sting the Democrats. They probably thought that this march would turn into another display of “Anti-Trumpisms”. Well, that didn’t happen either, specially to the degree that the leaders had planned.