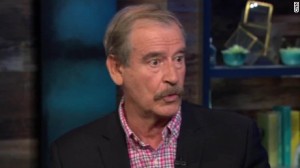 Back in 2006, Mexico had a very contested election. It went on for days. There were massive demonstrations about the results. In fact, president-elect Felipe Calderon had to be brought in through the back door to be sworn before stunned deputies. You can not make this up. It did happen amid what the NY Times headline called “catcalls”!

What would have been the reaction of Mexicans if a U.S. politicians (God forbid a former president) had made a video encouraging voters to go one way or another or calling the results illegitimate?

I know the answer. They would have screamed “intervention” and lots of other things. And they would have been right. No country should meddle in elections.

Now, let’s move to 2016 and all of the charges that Russia elected Donald Trump.

First, it is interesting that the Democrats claim that Russia interfered in the election and then tell us that Hillary Clinton won the popular vote. Are they saying that the Russians only intervened in “swing states” like Pennsylvania, Michigan, and Wisconsin?

Second, where is the Democrats’ outrage about a former president of Mexico making a video before and after the election?

Former President Vicente Fox (a man that I supported in 2000 as an agent of change) just released a video calling Mr. Trump illegitimate. It goes like this:

Vicente Fox, former President of Mexico, shares his take on President-elect Donald Trump, and his threat to U.S.-Mexico relations. He says Trump is an “illegitimate president” who “didn’t win the general election.” Presumably, Fox is referring to the popular vote when he says “general election.”

“He’s got too many people against him and they have shown out on the street,” Fox said.

He continued: “But anyway, in Mexico, we can be rude also. We are strong now. We’re going to defend our people wherever they are. Inside Mexico, or outside Mexico in the United States. We’re not going to let this guy to offend them anymore. To offend the dignity, and to deny the enormous contribution they make to the U.S. economy.”

Isn’t that sweet? “El señor Presidente” Fox needs a class on constitutional law. Maybe he can take one from soon to be retired President Obama, who I understand taught such subjects years ago.

We honestly don’t know just what Russia tried to do with respect to our elections. Let me add that I am not a fan of Mr. Putin and wouldn’t put anything past him. Nevertheless, I doubt that anyone has the ability to fix election systems in 50 states. Even Putin can’t do that.

At the end, Mr. Putin did not make a video but Sr. Fox did. I would love to see one of reporters ask Mrs. Clinton about Mexico’s efforts to influence our election. It would also be a wonderful idea for one of Jorge Ramos’ segments on Univision.