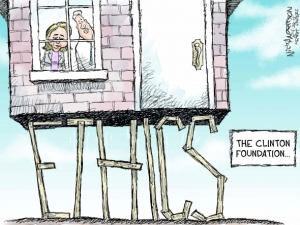 Our friend Fausta Rodriguez Wertz has been on this story for a week.

It begs the question: What was The Clinton Foundation looking for in Colombia?

Here is a bit of the very complicated story:

Fondo Acceso was founded in 2010 by Bill Clinton, the Mexican billionaire Carlos Slim, and the Canadian mining magnate Frank Giustra. The Clinton Foundation and the SLIM Foundation committed $10 million each to the fund.

The Clinton Foundation is a 50 percent shareholder in the company, according to its tax records. Numerous Clinton Foundation and Clinton-Giustra Enterprise Partnership officials are listed as Fondo Acceso directors in Colombian corporate filings.

The fund has reportedly distributed $1.5 million to Alimentos SAS, a fruit-pulping company, and $250,000 to the telecommunications firm Fontel SA in exchange for shareholding agreements. The Clinton Foundation and CGEP have declined to release a full list of Fondo Acceso’s investments.

What exactly is the point of having President Clinton in business in Colombia with a Mexican telecommunications billionaire and a Canadian mining magnate? Why all the secrecy? Why was the website takend down?

I have a few other questions:

1) Did they do this to avoid regulations in Colombia or the U.S.? Or to create a fund to go around U.S. oversight or campaign laws?

2) Why didn’t President Clinton create the fund to boost business in the U.S.? For example, how about a fund to invest in our inner cities? Why promote investment in other places when our cities are desperately lacking in jobs?

3) Did Secretary of State Hillary Clinton have any role in this?

According to Fausta, Hillary Clinton’s timeline is interesting — or maybe Clintonian:

2008: Hillary Clinton campaigns for president, is against the Colombia Free Trade Agreement.

2009: Hillary Clinton becomes Secretary of State. She starts lobbying members of Congress for approval of the CFTA, as revealed on emails released on February 2016.

2010: Bill Clinton, Carlos Slim, and Frank Giustra (who pledged $100 million to the Foundation) open Fondo Acceso. Previously, in June 2005, Gold Service International, a South American business group, paid Bill Clinton $800,000 to deliver four speeches in South America. Gold Service was pushing for the free trade agreement, which would help boost Colombian exports to the United States, and Clinton was supportive of the policy.

“Once is happenstance.
Twice is coincidence.
Three times is enemy action”

Finally, am I the only one who finds Mrs. Clinton’s change of heart about the Colombia Free Trade Agreement just a bit too cute?

This is especially relevant because she was for the Trans Pacific Partnership until she was against it. Can we believe anything that this woman says? Will she flip as President Clinton to take care of some donation that someone gave to the Clinton Foundation?