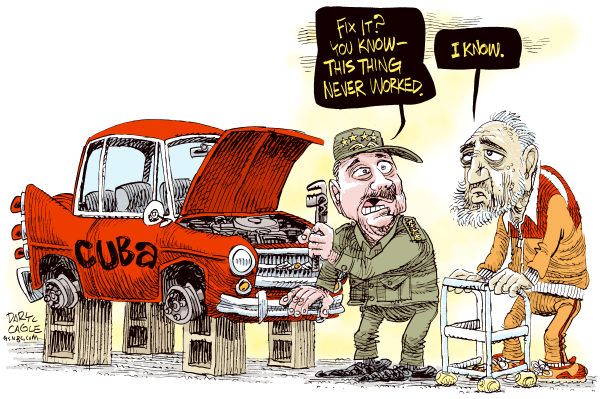 For a couple of years, we’ve heard about reforms in Cuba and all those efforts to expand small businesses in the island.

Well, not so fast. It’s always tough for a communist regime to change and this one is no exception.

According to news reports, “reformas” are on hold. There is more in this post at Babalu today.

As Gorbachev learned in the last days of the USSR, reforming a communist state is impossible. The problem is that communist governments create lots of losers but few winners.

It’s misery for most, but delight for the few who were born into the right family or kissed someone’s you know what. And those winners, the small clan that benefits from the state ownership of everything from sugar to hotels, do not want to give up their “commission checks” or privileges.

In a free market economy, private businesses compete with each other. In Cuba, they take dollars from the state or Castro, Inc. as we call it. In plain language, Cuban owned businesses represent a threat to the dinosaurs who surround Diaz-Canel.

The aforementioned AFP article points out that Cuban entrepreneurs are afraid that the regime will get information about their existence from tourists who may report where they are staying. This is because many tourists are staying and spending money in improvised hotels and restaurants in people’s homes.

Maybe another reason to delay your Cuban vacation until Cuba is free from this regime.

In the meantime, did anyone really think that a communist regime would reform itself?

PS:   You can listen to my show (Canto Talk) and follow my blog.