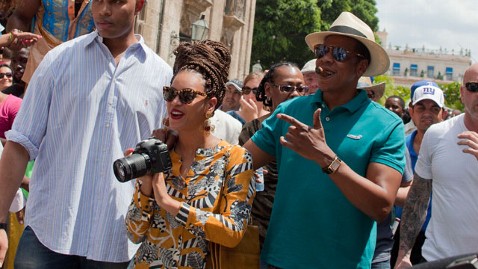 University of North Carolina professor Louis Perez penned an Op-Ed that was published in yesterday’s Miami Herald that purported to show us what the scandal that ensued after Beyonce and Jay-Z vacationed in Cuba as VIP guests of the apartheid dictatorship of the Castro brothers taught us. The good professor ran down the litany of pro-engagement, pro-travel, pro-business, and pro-Castro arguments that have all been debunked but continue to be breathlessly repeated.

What the Beyonce and Jay-Z Cuba uproar teaches us

The furor over the recent visit of Beyonce and Jay-Z to Cuba calls attention to the archaic U.S. embargo and the odious restriction on our right to travel.

The travel ban is actually something of a fiction.In practice, the ban prohibits the travel of some Americans, and permits the travel of others, surely an anomaly in a nation that proclaims equality under the law as the cornerstone of its legal system.

Hundreds of thousands of Americans travel to the island to visit relatives. And many thousands more travel to Cuba under a “people-to-people” license — that is, travel authorized by the Treasury Department in the name of cultural exchange and education.

In fact, American group travel to Cuba has developed into a growth industry in the United States. The alumni associations of scores of American universities, including Stanford, Princeton, Harvard, MIT, Tufts and Vanderbilt, among many others, have availed themselves of the opportunity of a “people-to-people” license to organize educational travel to Cuba for their alums.

Other Americans travel to Cuba under the auspices of religious organizations licensed to provide humanitarian aid. Thousands of American students pursue educational opportunities in Cuba. American journalists are authorized to travel to Cuba. So are American academics.

Then why the fuss over Beyonce and Jay-Z? […]

However, it is obvious there are quite a few important aspects about this trip by hip-hop’s first couple that did nothing to teach Professor Perez anything about Cuba.

Apparently, the trip by Beyonce and Jay-Z did not teach the professor that Cuba is under the yoke of a totalitarian dictatorship.

The trip also did not teach Professor Perez anything about the heinous apartheid system maintained by the Cuban government that targets Cuba’s black citizens.

The vacation escape did not teach the professor anything about Sonia Garro, a black dissident woman held in a Castro gulag for more than a year for daring to oppose the Castro dictatorship.

Professor Perez apparently learned nothing of the black Cuban rapper currently imprisoned in Cuba for his “counterrevolutionary” music.

Professor Perez appears completely oblivious to the dozens of Ladies in White, many of them black, who were beaten and arrested on the same weekend Beyonce and Jay-Z were in Cuba drinking brandy, smoking cigars, and partying with members of Cuba’s elite ruling class.

The list goes on and on about what this trip by Beyonce and Jay-Z to Cuba did not teach Professor Perez or many other Americans.

And that is where the moral and ethical problem lies with callous vacation trips to Cuba such as this. They not only do nothing to expose the atrocities in Cuba, they provide invaluable propaganda and thick cover for a despicable and racist regime.

More trips like Beyonce and Jay-Z’s trip, where they hobnobbed only with Cuba’s dictatorial elite will only teach people like Professor Louis Perez that Cubans like Sonia Garro, rapper Angel Yunier Remon Arzuaga, the Ladies in White, Antúnez, Dr. Oscar Elias Biscet, Angel Moya, Berta Soler, and hundreds more in Cuba simply do not exist.